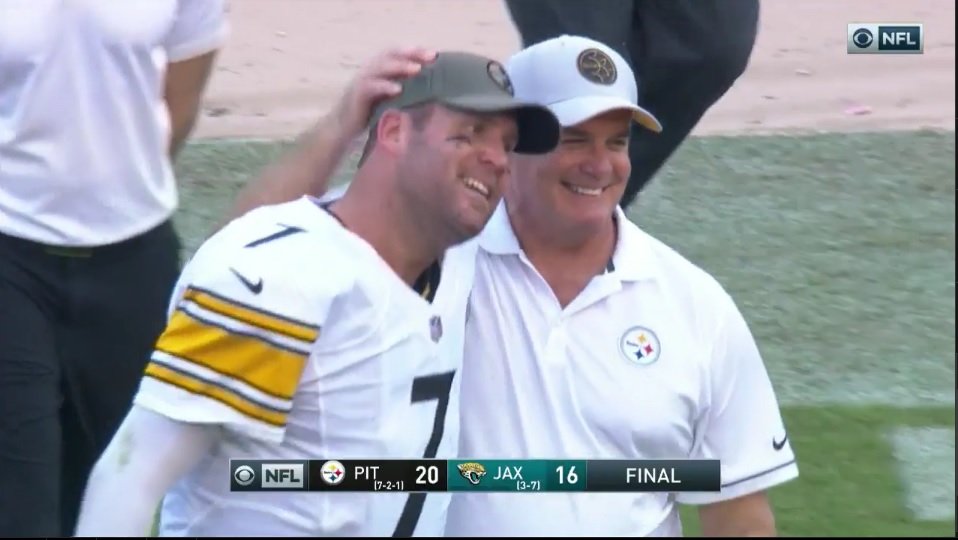 The Outta the Way Café was packed. I shared my little two-seat table with Terrence, a DC native who became a Pittsburgh Steelers fan back in the 1970’s. One of his first Christmas gifts was a Terry Bradshaw figurine that his mom gave him. She wasn’t a sports fan, but it was an inexpensive gift back then. He ended up marrying a Pittsburgh girl so if the hook wasn’t fully set then, it is now.

It was great to see Max & Carol. Also, met some new people who follow the Depot like Kristen. Always cool to hang out with Steelers fans and regular readers and listeners of Steelers Depot and the Terrible Podcast.

A lot of Steelers fans were optimistic before kickoff, but the neurotics were warning of the dreaded “trap game.” Remember, the term neurotic refers to persons with “signs of mental disturbance but does not indicate complete psychosis.” I believe it is completely applicable to the average Steelers fan.

Unusually, there was no big drama leading up to kickoff. Pregame excitement was behind us, instead of coming, it went. Maybe the team needs more drama.

Matthew Marczi described what we should watch for in the game.  Tyson Alualu playing for Stephon Tuitt. Matt Feiler starting his fourth game in a row for Marcus Gilbert. Could the defense avoid a slow start? The match-up between Bud Dupree and the newly signed Ereck Flowers. Would the Steelers use their base 3-4 defense more to stop the run?

Alex Kozora predicted the factors that would lead the Steelers to win or lose the game. In sum, the Steelers would win if they could run between the tackles, overload their zone coverage, and contain Blake Bortles. Alternatively, they lose if the defensive line doesn’t control the line of scrimmage, they lose the turnover battle and if the Jaguars successfully use trick plays.

A putrid performance. Other than a penalty, Pittsburgh did not get a 1st down until there was less than 3 minutes in the half. The Jacksonville Jaguars defense set the tone early in the game when they stopped Ben Roethlisberger short on a quarterback sneak. The Jaguars dominated the Steelers offensive line. Ben was working from collapsing pockets and forced the ball when he gave himself time on his scrambles. Seven possessions resulted in 4 punts, 2 interceptions, and mercifully letting the half end. Ben Roethlisberger had the deer in the headlights look again. He seemed to be forcing the ball.

Mike Tomlin may have to reconsider deferring the kickoffs. The Steelers started out the 2nd half with a three and punt. Pittsburgh’s next drive was aided by 30 yards of Jacksonville penalties which also negated an interception. James Conner gained 7 yards on a tough run to get a first down on 2nd and 6. But the potential scoring opportunity was squandered by more poor judgment by Ben trying to force it to Antonio Brown. The play was compounded by ridiculous situational awareness after Ben’s 3rd interception of the day. If there is no whistle, tackle the guy with the ball!

Once the Jaguars went up 16-0 there was worry in the air. Then a crazy play to AB for a TD seconds later. The first person left the café after a 4th down pass bounced off Conner’s hands with 6:53 to go. But I recalled a game from Pittsburgh’s past. The Steelers were winning by 14 points in the 4th quarter back in 1976. Ken ‘Snake’ Stabler then led the Oakland Raiders to score 17 points against the Steel Curtain to steal a victory in the final five minutes of the game (check the Steelers Depot live blog). The Jags defense is good, but it is not the Steel Curtain. JuJu Smith-Schuster made three big catches in a row for 39 yards. Then, Vance McDonald catches a touchdown while wearing a Jacksonville defender.

Steelers have the ball with 1:42 left. A bizarre drive. Conner drops another big opportunity. But AB converts a third and 10 and it’s first and goal with 23 seconds. Ben throws another interception! But for the second time a Jacksonville penalty negates it. Eight seconds left, and Ben has the ball. What, me worry? Ben takes care of business even with Feiler almost blocking him out of the endzone. Yoi.

My impression of the first half was the front 7 losing the line of scrimmage as they were pushed back. Fournette seemed to be on his way to a 150 or more yards of rushing. In fact, Jacksonville ran the ball on 14 of 15 plays on their first scoring drive. But a woman who called in to the Steelers Nation Radio postgame show told Stan Savran, “the team doesn’t have to be good all of the time, just at the right times.” Three times Jacksonville drives ended with field goals which kept the Black & Gold in the game.

Javon Hargrave was prominent in two of those drives. He tackled T.J. Yeldon short of the first down at the Pittsburgh 20 forcing a second Jaguar field goal instead of a first down in the red zone. On the next drive, Jacksonville is driving after intercepting Ben’s pass. Hargrave sacks Bortles to force a third field goal. Hargrave recorded another sack when Jacksonville tried throwing the ball late in the half. The Jaguars offense proving to be one dimensional. The question is whether the Steelers defense can stop the run.

Mike Tomlin says they did not make defensive adjustments at halftime. However, I believe Jordan Dangerfield was in early with Pittsburgh playing three safeties. Looking forward to Steelers Depot to analyze the difference between the scheme used in 1st & 2nd halves.

T.J. Watt stepped up to sack Bortles to force a punt on their first drive of the second half. Unfortunately, Ben’s third interception led to the Jaguars best drive where they scored off the turnover. They converted two 3rd downs. One by a pass to rookie DJ Chark. The other a Bortles scramble when the defense did not contain him.

Something clicked in the last quarter. The Jaguars had four straight 3 and outs. Coty Sensabaugh dropped Yeldon to prevent a first down to start the 4th quarter. Jacksonville has the ball on their own 41 after a good punt return. Enter Vince Williams and Cam Heyward who sack Bortles twice in a row to beyond the 50-yard line. On the next drive, Jon Bostic makes a couple tackles then Hargrave tips the ball to cause an incompletion on 3rd down. Tomlin opts to kick deep with 2:28 left and the Steelers down 16-13. It’s all on the defense. Sean Davis, Heyward, and Vince Williams all make tackles to force the Jaguars final punt. The defense punctuates the game with Watt’s strip sack and Heyward recovering the ball on Jacksonville’s final desperation play. Hargrave played an inspired game.

Ryan Switzer returned three of Jacksonville’s nine punts. His longest return was 7 yards. He held onto a ball for no return after Joe Haden was beat by the Jaguars gunner. Switzer also had two kickoff returns. One made it to the 26-yard line, but the other return only got to the 21. Tomlin must carve out some practice time so Danny Smith can fix the blocking in their return game.

Jordan Berry’s 6 punts averaged 51 yards. However, one was returned for 25 yards. His last punt could have been disastrous as it was short – only 41 yard and returned for 11 to put Jacksonville in position to extend their lead. When you factor in the touchback, his punts netted less than 42 yards per kick. I’m not sure if hang time or just poor punt coverage allowed the 25-yard return. Regardless, Danny needs to fix it.

Chris Boswell had no field goal attempts but converted both his PAT’s. I believe that he can kick touchbacks on command but will kick short when Pittsburgh wants to try to pin the opponent deep. He has only been called upon to try a walk off field goal once this season after nailing a bunch last year. He is 0-1 so far but hoping the offense can keep the team far enough ahead that he is not tested too often.

A lot of the 954 1st half comments reflected concern at the Steelers performance. After the first interception, Steely McBeam noted that “Ben is spooked. Brown was open there.”  BurghBoy412 agreed, “Ben is scared of this team. It’s so obvious.” Mr. KnowItAll asked and answered, “How do you throw a perfect game…have 10 days to study your opponent and then play like an Undrafted Rookie…” But SteelCityDefense saw the forest instead of the trees: “9-0 at halftime… might be the luckiest thing we could ask for after that half. If the team comes out in the second half playing the same way, then it’s all on coaching”

Steelers Depot respondents met the standard in the 2nd half with 1013 comments. At some point when all seemed lost, the Intense Camel proclaimed, “If you’re still watching, you love this team.” Just a little later, Pittfan burst out “BEN NEVER QUIT!!!!!” with James Tripp responding that “Just took 3 quarters to get started.” New dad Steely McBeam proudly noted, “My son turned 3 weeks old today. In that time, the Steelers have played 4 games and have won them all.” HoosierLawyerMounty wanted to know, “how many heart attacks has the little crumb catcher had already? raise him right lol” I had to remind everyone, “Yinz worry too much.” As Reader783 sagely said “All of the below comments did not age well at all!”

Steelers in the white trunks for 55 minutes. The ole rope a dope: pic.twitter.com/xGBCcGR2a7

A strange game with some strange play. “The problems and pitfalls of an enterprise are justified and forgotten, so long as everything turns out well in the end.” All’s well, that ends well. Ben was horrible for most of the game, but he was good at the right time. But as we know, this season is not over. The Steelers must forget this game and begin the preparation for facing their next opponent. The Denver Broncos will present their own set of challenges for Mike Tomlin and company to unravel.

In the 2018 Memorial Day Weekend: Steelers Friday Night Five Questions, I committed to play songs that Steelers Depot respondents suggested might be the new Steelers anthem if Renegade by Styx was ever replaced. Here is entry 31 of 45 from FlaFan47: Everybody Wants Some by Van Halen.