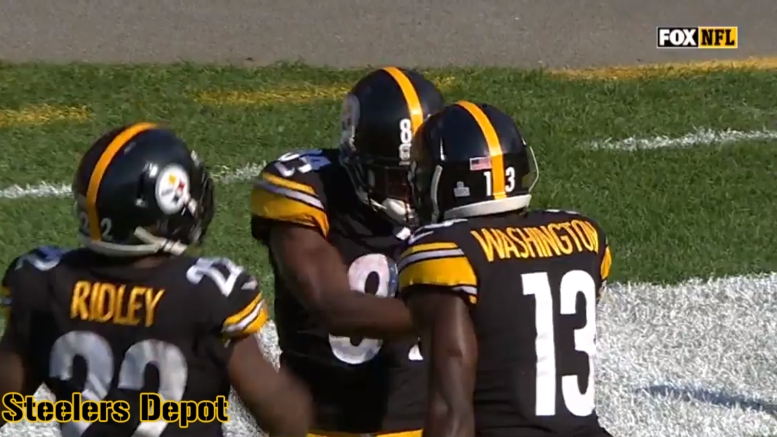 Last week was a disappointment for James Washington, inactive for the first time all season. The writing was on the wall. Justin Hunter got the nod to close out the Cincinnati Bengals game, threw a key block on Antonio Brown’s game-winning touchdown, and was talked up all week by Ben Roethlisberger.

But, as the CBS broadcast noted during the week, last Sunday against Cleveland may have been Hunter’s last shot. He responded with a typical but quiet two catch, 15 yard performance. So it’s no surprise that this week might be Washington’s chance to stay ahead for good. According to this tweet from ESPN’s Jeremy Fowler, the rookie saw more work in practice this week.

Steelers WR James Washington, inactive last week, said he received more reps in practice this week. That could lead to a role in the offense Sunday at Baltimore.

Through the first half of the season, Washington has only five catches for 49 yards. His highlight of the year came on his first reception, a touchdown pass against the Kansas City Chiefs. Since then, he’s had trouble finding consistent playing time, route concepts that get him open, and has largely been, at best, the #5 option in this offense. Strong play from tight ends Jesse James and Vance McDonald have let the Steelers play more 12 personnel where a #3 receiver doesn’t see the field.

But the team should know by now what it has in Hunter. Which means giving Washington every chance the rest of the way to grow, develop, and be an asset for this team.

Him developing into a vertical threat, what he was drafted primarily for, would complete the offense. Until then, they’re still searching for what they lost in Martavis Bryant, even if shipping him to Oakland is still the unquestionable correct decision.

With the Steelers looking healthy for Sunday against Baltimore, Marcus Gilbert is the only player likely to miss, it’s almost certain one receiver will be inactive. We know Brown, JuJu Smith-Schuster, and Ryan Switzer are guaranteed to be active. Darrius Heyward-Bey should be too, just as he was last week. That leaves one helmet for Hunter and Washington. Based on how things looked in practice, it looks like Washington will get a chance to redeem himself.