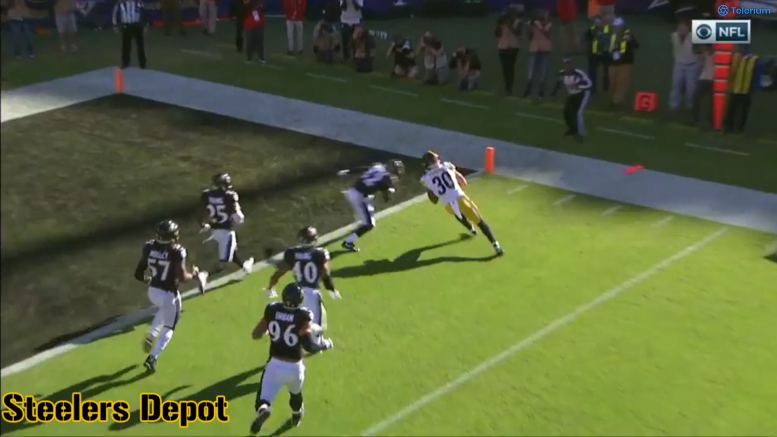 Anybody who is questioning the long-term viability of James Conner as an NFL running back can probably stop doing so at this point. The Pittsburgh Steelers’ second-year player is not simply filling in for Le’Veon Bell. He is a key part of one of the best offenses in football, and a major contributor to that effort, leading the team in both yards from scrimmage and scores.

And his work in the passing game has been crucial toward that. After another strong day through the air—at career-high seven receptions for 56 yards and his first receiving touchdown—he now has 38 receptions on the year for 379 receiving yards and a touchdown through half of the year. If he continues to put up similar numbers, he will finish with 76 receptions for 758 yards and two touchdowns, all while averaging over 10 yards per reception. It would be just the third 750-yard season in team history by a running back, first accomplished by Ray Mathews in 1955 in a 12-game season.

Said Head Coach Mike Tomlin after the game, during which Conner also rushed for 107 yards, “I don’t want to take anything away from James, but the big boys up front are opening holes, so it’s a collective effort”, regarding the ground game. “James is going above and beyond”.

He had more words for the other areas of his production, however. “I’m more pleased by what he’s doing in the passing game, and from a blitz pickup standpoint. That’s a little more unique than the rush, and we knew that he could run the ball since he showed up at Pitt at 18 or 19”.

The fact that Conner has 706 rushing yards on 151 carries on the season—averaging just under 4.7 yards per carry—is ho-hum from the Steelers’ perspective. As far as they are concerned, they always knew that he was capable of churning in such results, which put him on pace for 1412 rushing yards on 302 carries and 14 rushing touchdowns.

It’s the 38 receptions for 379 more yards that are the real key ingredient to what has made him such a better player from last season, and in ways that were not wholly predictable when they drafted him in the compensatory section of the third round of the 2017 NFL Draft.

Conner might not be a number two wide receiver, but he is certainly a number one pass-catching running back and third-down back. He has more than proven able to perform all function of the position at a high level.