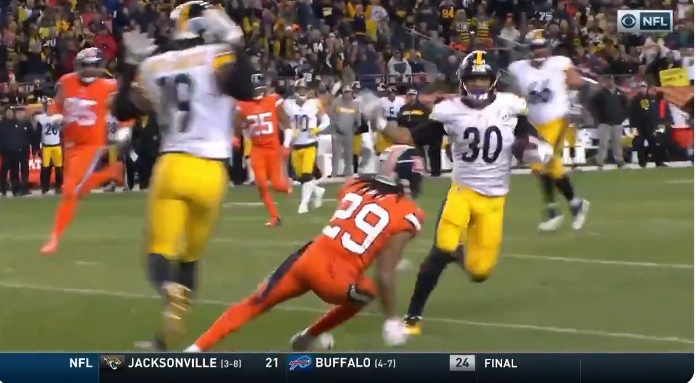 It’s been a rough two weeks for James Conner, facing his first real adversity of the season. But Mike Tomlin isn’t worried about his ball security and excited to see him bounce back.

“I really don’t. Not overly,” Mike Tomlin said during his Tuesday presser when asked if he had any concerns about Conner taking care of the football.

Conner has fumbled four times this season, including a costly one against the Denver Broncos on Sunday. Taking a 2nd and 16 screen pass that would’ve gone for a first down, he lost the ball despite the defender never coming close to his arm. Denver recovered and marched down the field for the game-deciding touchdown.

Tomlin, however, recognized when opponents see those fumbles on tape, it makes them all the hungrier.

“But I will acknowledge that as a feature ball carrier in this league, when you got some tape with some balls on the ground, people use that as motivation. I know we do. We’re playing a feature runner and in recent weeks, he’s got balls on the ground, Wednesday morning, that’s being discussed. That’s the nature of my conversation with James. Just understand how the other 31 teams function. That in LA somewhere tomorrow morning, they’ll be talking about his balls on the ground. I’ll be excited in watching his response to that.”

Unfortunately for Conner, he’s coughed the ball up in some key moments. That began in Week One, letting one slip away as the Cleveland Browns completed their comeback, a game Pittsburgh should’ve won (for many reasons, not just due to Conner’s fumble). Last week, the Steelers likely come away with at least a field goal to take the lead if he doesn’t turn it over.

Adversity is nothing new for Conner. But this is certainly a new test, stacking less than stellar weeks after a hot start to the year. For the first time in his NFL career, he’s dealing with criticism. Much of it invalid but stuff that can be difficult to avoid. Fans on social media, probably blowing up his Twitter mentions, of how the Steelers made a mistake by keeping him over Le’Veon Bell, how he’s not a feature back, or “just a guy.” Believe me, I’ve already seen it. For Conner, it’ll be tuning out that obvious noise and focusing on the Los Angeles Chargers, a huge matchup Sunday night.

Tomlin said the Steelers won’t use him any differently moving forward.

“Got a lot of confidence in him. As a ball carrier and central part of what we’re doing offensively.”