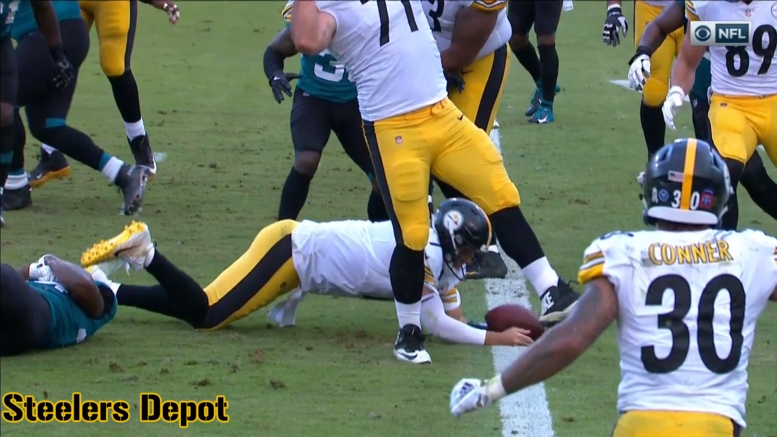 I’m certainly nowhere near the longest-lived Pittsburgh Steelers fan, but I’m struggling to recall a more improbable win by the team that I’ve personally seen than today’s 20-16 outcome, which seemed much more unlikely than even the playoff victory over the Cincinnati Bengals a few years ago.

And yet here we are, with the Steelers sitting in the second-seed spot in the AFC with a 7-2-1 record, riding a six-game winning streak, the second-longest active right now behind only the Texan Texans, who started out 0-3 before getting to 7-3.

Things could have gone much, much differently in so many different spots of this game, however. The Jacksonville Jaguars got to within the Steelers’ 30-yard line or better on three straight possessions in the first half but were forced to settle for field goals each time, often because of bad passes.

But things changed in the second half. The offense was moving the ball better, even if Ben Roethlisberger still managed to throw an interception in the red zone, on a drive that could have ender earlier on an interception that was called back due to a somewhat controversial roughing the passer penalty. But they did a lot of scoring after that, including a 78-yard touchdown to Antonio Brown that got things started.

After being forced to punt a drive after that, and then a turnover on downs, Pittsburgh was down by 10 with just 5:06 to play before they put the ball in the end zone twice, first on an eight-play, 80-yard drive that ended with a great Vance McDonald grab and then with a seven-play, 68-yard possession that was capped off by a Roethlisberger keeper after his read fell through.

Oh, and before that even happened, he threw yet another would-be interception that was called back because of a facemask penalty from the one-yard line.

The amount of times that this game looked to be over seemed to be numberless. It was certainly the most hopeless victory since I’ve been doing live blogs, based on how I covered the game. But the thing is, it counts the same as the past five results. It’s just as good as their other six wins. And for today, that’s all that matters.