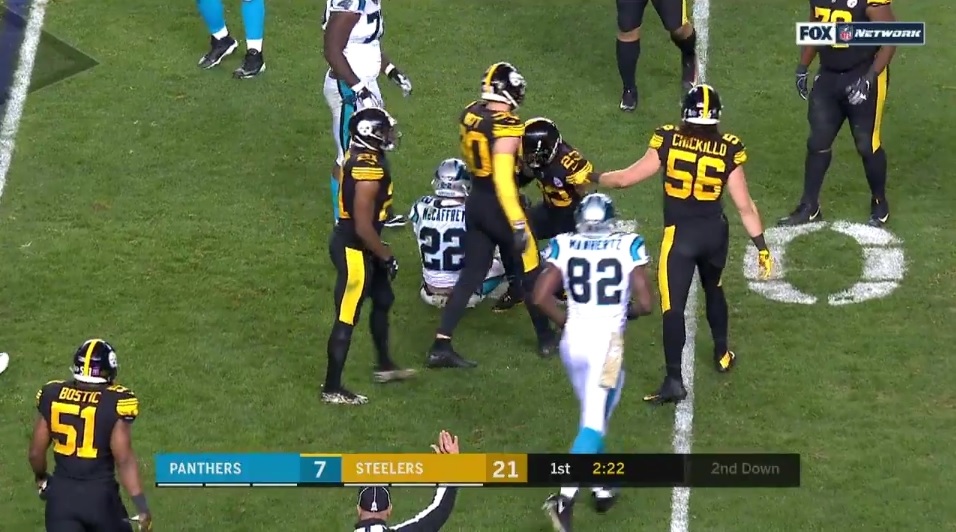 The first drive was bad. Everything else wasn’t. That’s how you could sum up the Pittsburgh Steelers’ defensive performance tonight. So what changed? A large reason for that was the ability to make the Carolina Panthers one-dimensional. Run up the score and force Cam Newton to sit in the pocket.

“None of [our adjustments] are possible unless our offense isn’t putting up the points they were,” T.J. Watt told the media after the 52-21 win. “That put them in a hard position and they had to throw the ball a lot more than they wanted to.”

Putting aside the Panthers garbage time runs to close out the game, they ran the ball just 15 times. Led by Christian McCaffrey, it was effective, but Carolina had no choice but abandon it as the Steelers built up a huge, early lead.

“They rely on their run,” Mike Hilton said. “It was a big week for those two guys, Bostic and Vince, and they played well.”

Vince Williams took advantage of Watt’s pressure, recording the first pick-six of his career to give the Steelers a lead they’d never give back. He added a sack later in the game for good measure. Jon Bostic didn’t have as pretty a game on the box score but he made some strong open field tackles, finishing Thursday night with a team-leading ten of them.

“Everything runs through #1,” Hilton added, referring to Newton. That’s their guy. That’s their go-to guy. We did well containing him tonight…we feel like defensively, we played well.”

Newton ended the game with just two carries for ten yards, the worst rushing performance he’s had since October of last season. Beyond that, they kept him within the pocket, not letting him escape and extend the play. It kept a lid on the offense, as the secondary has done a great job of over this five game win streak. McCaffrey aside, no Panthers’ player caught a pass for longer than 15 yards, much of that occurring during the end of the game.