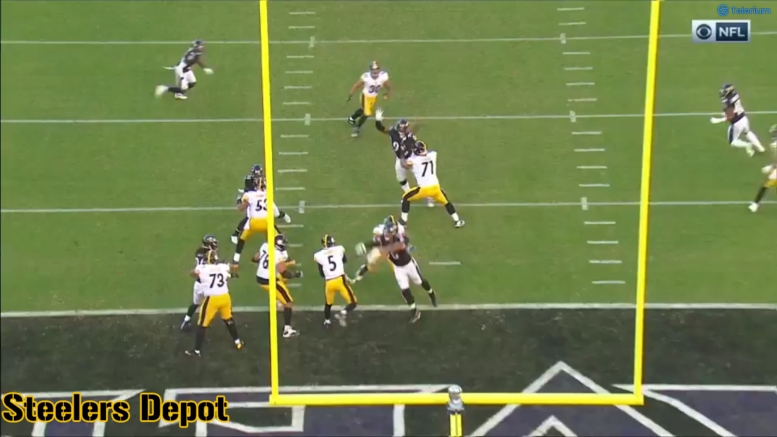 Pittsburgh Steelers second-year quarterback Joshua Dobbs played his third snap of the season today, but this one was much, much different from the first two. His two previous snaps came in victory formation, the end-of-game (or half) formation designed to safely take a knee and run the clock. He took these snaps in Week Five and Week Eight in blowout victories against the Atlanta Falcons and the Cleveland Browns.

Today, he put the ball in the air, and did so in a critical situation. Veteran quarterback Ben Roethlisberger had to leave the game for one play after suffering an injury on a scramble that didn’t even count. And according toe Roethlisberger, it was Dobbs’ call to throw it, saying post-game that it was “awesome, can’t say enough about it. It was a run play that he checked to a pass and he was awesome”.

Backed up at his own five-yard line and facing a second and 20 following two offensive penalties, Dobbs checked out of a run play, used play action with James Conner, and rifled a pass down the field to JuJu Smith-Schuster his draft classmate, for a 22-yard completion.

Officially, he posted a quarterback rating of 118.8 on the day, with one completion on one attempt for 22 yards and no touchdowns or interceptions. But the result of the play and the context in which it came made it even bigger.

The Baltimore Ravens had not long before just scored a touchdown to make it a 20-13 game after it previously looked as though the Steelers might have a comfortable victory on their hands. They went three and out in their response drive, and while the defense forced a three and out of their own, Pittsburgh looked to be reeling.

After a five-yard run to the 20 by Conner on first down, a completion for a first down to Antonio Brown was negated by an offensive pass interference penalty on the wide receiver. Now second and 15, Roethlisberger took off scrambling, gaining 12 yards but being tackled hard and staying down, force to exit the game.

What’s more, Alejandro Villanueva was flagged for holding on the play, which negated the run and instead made it second and 20, all the way back to the five. And Roethlisberger was on the sideline. Naturally, the perfect time for Dobbs to take the first meaningful snap of his career.

He rose to the occasion, as we saw, but it was all they needed from him, as Roethlisberger was ready to return after missing one play, quickly completing a deep pass after checking game into the game. The Steelers would go on to score a field goal on the drive to make it a two-possession game again.

How might the game have unfolded differently had Dobbs not made that play? What if the Steelers went three and out deep in their own territory early in the fourth quarter, with just a seven-point lead? Fortunately, we will never have to find out the answer.