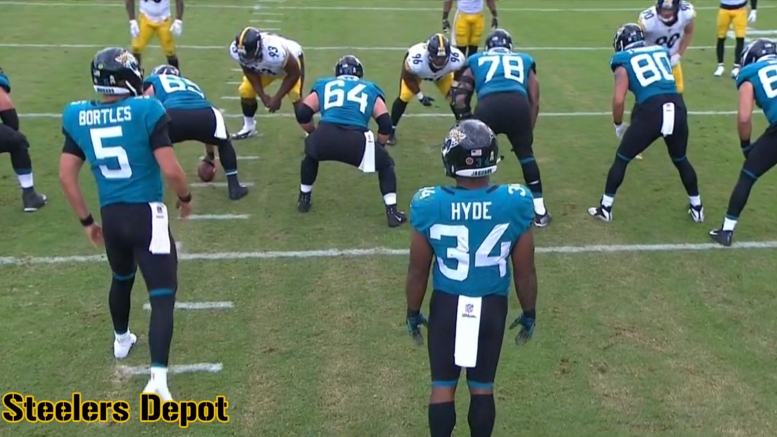 The Jacksonville Jaguars were the top running team a year ago. But heading into yesterday’s game, they had been anything but so far through the 2018 regular season. Not only had they failed to have a single 100-yard rusher, they did not even have one game in which all of their running backs combined for 100 or more yards on the ground, though Blake Bortles’ scrambles pushed them north of 100 a few times.

Yesterday was a completely different story. While Leonard Fournette came up just short of rushing for 100 yards himself, finishing the game with 95, the combination of himself, Carlos Hyde, and T.J. Yeldon gave their three-headed backfield 162 rushing yards all told. Two scrambles by Bortles made it 179 in total.

They seemed to run at will through the Pittsburgh Steelers’ defense through the first half, which came into the game ranked fourth against the run in terms of rushing yards allowed per game. Yesterday’s result added nearly 10 yards to their per-game figure, however, and knocked them down the ninth, now averaging just under 100 yards per game.

And nobody seems to know why that all happened in the first half. Said Joe Haden, “I don’t know what was going on. They just really have a good running team, but when they got down in the red zone, we made them score field goals and last year in the playoffs they scored touchdowns”.

That was just one of a number of comments from players in trying to find an explanation for why they were so gutted on the ground through the first half—yet they never even let the Jaguars run a play from inside the 20-yard line in spite of that.

And nobody seemed to have an answer as to why things were different in the second half, either, during which the Jaguars only had any kind of success on one of their seven possessions over the final two quarters, which resulted in their only touchdown.

We will have to find the answers ourselves as the week wears on, particularly once the coaches tape comes out, so we can look at exactly what happened on those first-half gashes and why it was different in the second.

The Steelers had done a nice job again the run for the most part all season up to yesterday’s game, and the Jaguars had not even been running the ball particularly well prior to that, so the first half was tough to stomach on multiple fronts.

All I can say for sure for now is that perseverance paid off, as they ultimately figured out how to keep Fournette and company in check. If they didn’t, the offense wouldn’t have even had the opportunity to be in position to win at the end of the game.