Attack the offense’s weakest link. A common approach for any defense in a given week. Defensive line coach Karl Dunbar has a specific phrase for it in going after the worst player on the offensive line. He calls it the “fish of the week.” He explained the idea during a coaching clinic with the Minnesota Vikings.

“I want to put my best guy on their worst guy,” Dunbar told the group. “We do it every week. We have the fish of the week. So whoever is their worst offensive linemen, we put their picture up on the board. So if you get on this guy, we expect you to win…it gives the guys something to build around. We want to see a fish on the board. That’s the guy we want to get.”

Jacksonville had plenty of candidates given how banged up their offensive line was. They entered with a fourth string left tackle, backup center, but ultimately, the “fish” was right guard Chris Reed.

Reed may not have been the planned fish out of water. He entered the game early, replacing A.J. Cann, bowing out of the game early with a bum hamstring. Reed had limited NFL experience, eight career NFL starts over three years and in 2018, just 57 snaps prior to Sunday’s game. He automatically became the weakest link for the defense to go after and by game’s end, you can legitimately pin FIVE of the defense’s six sacks on him.

Javon Hargrave’s first sack came off a mostly-missed stunt pickup in the second quarter. Hargrave and Cam Heyward are doing the twist, running an “Exit” stunt. Hargrave is the crasher, slamming into the A gap, and is the first to shoot through. Heyward loops over the top and goes second, scraping after Hargrave has shot the gap. The pre-snap alignment should be a giveaway something different is coming, as is often the case with stunts. The Steelers don’t align their DE over center with a three tech. 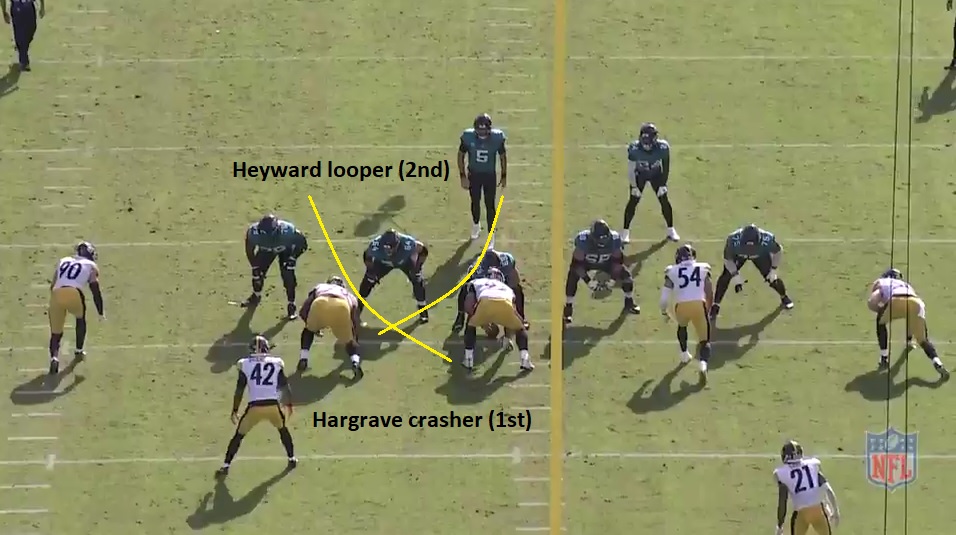 But when you’re a new guy, like the right guard Reed, you’re not always quick to pick up on those things. The stunt works and only at the last second does Reed disengage from Hargrave to knock Heyward out of the way. But Blake Bortles has already had to come off his platform to avoid Heyward and ducks into Hargrave’s lap. 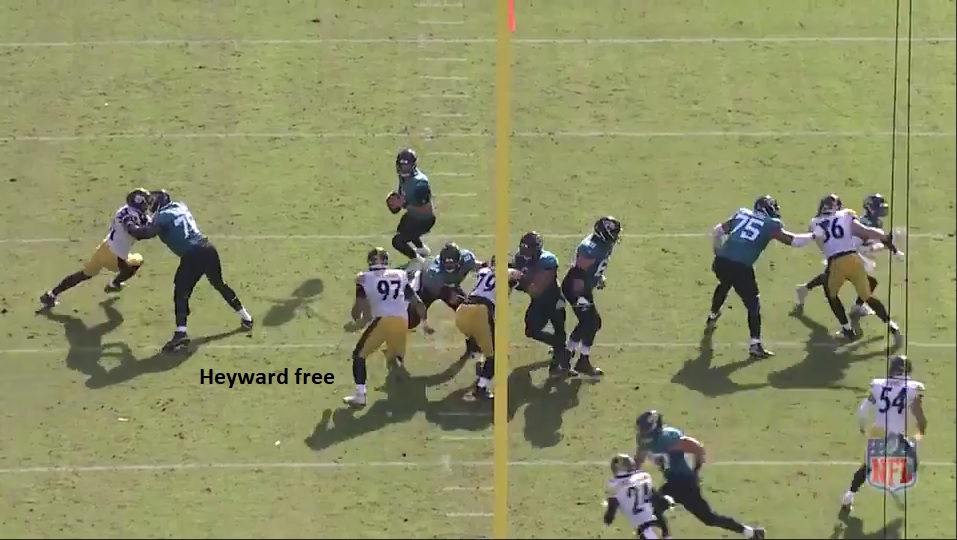 Here, Reed is thoroughly whooped by Hargrave. Inside step off the line to set him up, swim back aside, rip through to turn the corner and steer upfield. One of the best reps I’ve ever seen from Hargrave against an inferior player. Great job to work 1/2 man (attacking outside half) on this rush. This is a butt-whooping.

The Steelers blitzed their ILBs plenty this weekend. Much of it was to try and stop the run, which offered mixed results. But here, one of the few times the Jaguars ran playaction, let Vince Williams rush one-on-one with Reed. He’s able to chop the linemen’s arm, disengage, and is rewarded with the sack. Credit to Heyward for collapsing the pocket, running back Flowers into the QB’s lap, too.

Fourth one. Same as the first. Identical alignment to the first and you guessed it, a stunt is coming. 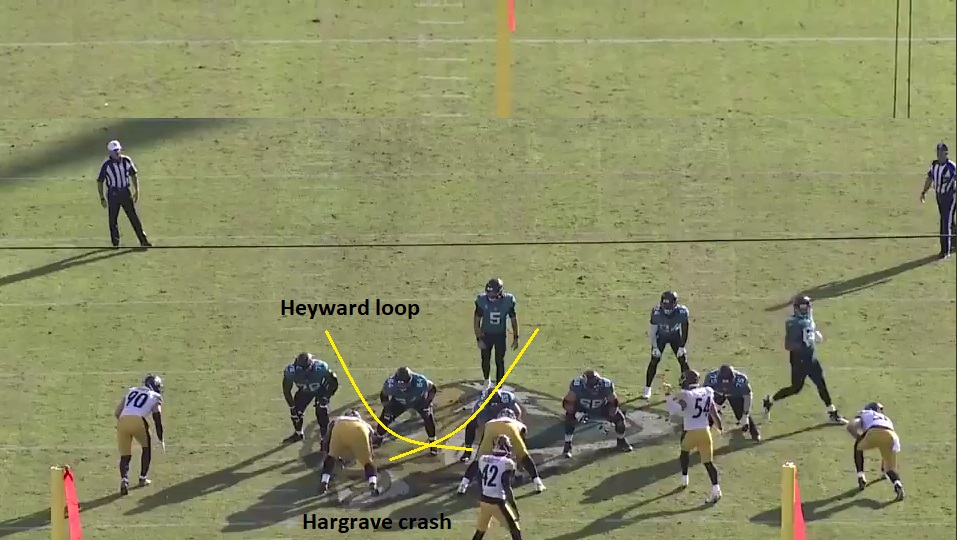 This time, Reed never passes it off, and Heyward is walking in free to take Bortles down.

Last one. The outside linebackers getting involved here too. Final play of the game, Steelers running a TEX stunt (tackle first, then the end) with T.J. Watt beating him inside for the strip sack and exclamation point on the game.

Coming into this game, Jacksonville’s pass protection was a weakness. Inserting Reed into the lineup made it that much worse. And the Steelers adjusted to attack the absolute heck out of him. Credit to coaching and players for having an enormous amount of success.