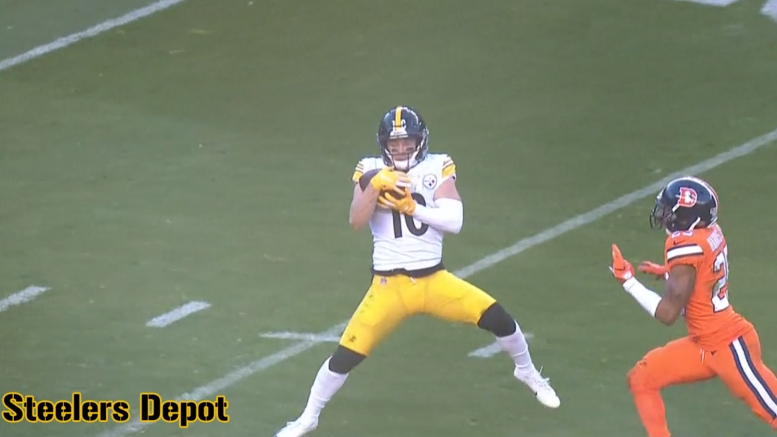 Pittsburgh Steelers wide receiver Ryan Switzer seems to prove just a little bit more with each passing week that he was a real find when the team traded for him in late August as he begins to emerge as their number three receiver. He caught six passes on Sunday for a career-high 67 yards and was called upon in some big moments.

That included this early play on third down in the first quarter from the Steelers’ 31-yard line. The Steelers schemed Switzer’s and Antonio Brown’s route to cross in a way that would stress the assignments of the coverage, which gave the former the opportunity to flash open quickly, making the grab between two defenders.

Midway through the second quarter, he actually caught an 11-yard pass on second and long that was wiped out because of the pick by Vance McDonald, but you have to like his route-running here, and the spin move that he pulls to gain extra yardage is a sign of his ability to create after the catch as well.

Ben Roethlisberger went to him a couple of times in big moments during the two-minute offense at the end of the first half, including a 15-yard catch on second and eight near midfield. Running a vertical, he sells an out at the top of his stem before cutting inside to slip between the linebacker and the safety.

And then he made this fantastic play to beat Chris Harris one-on-one out of the slot from the Broncos’ 31 for 24 yards. His inside plant and swipe combined with his surprising quickness won an outside release that allowed him to get up over the top of the Pro Bowler before taking what appears to be an uncalled helmet-to-helmet hit from the safety.

Of course, it’s not always that easy against Harris. On the final possession, he did a great job of breaking on a pass to Switzer for an incompletion.

He also held Switzer to just a four-yard gain on tight coverage on a short pass on second down before the offense got moving again on third down. Still, it was an all-around significant day for the young receiver.