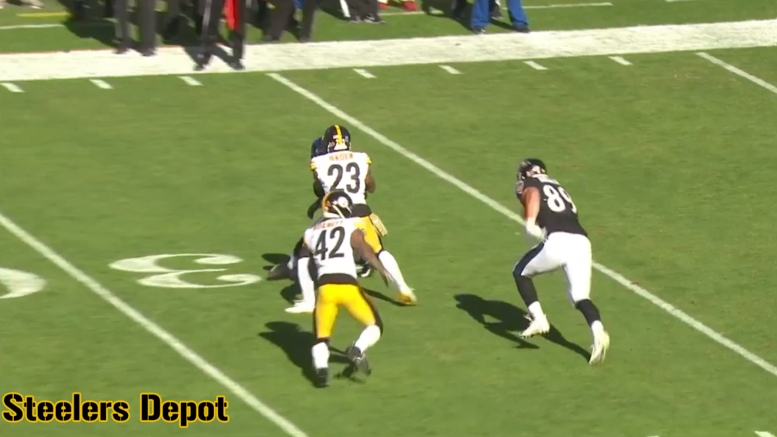 As you probably noticed on Sunday, Pittsburgh Steelers safety Morgan Burnett had a bit of a rough game against the Baltimore Ravens. Or at least, he had a rough few plays that each had a big impact and were high-profile. On a snap-to-snap basis, he didn’t play uniformly poorly, but they were the most significant plays for which he was on the field.

And you can’t talk about his performance without talking about those plays, so let’s do exactly that. On the third play of the game, the defense put the Ravens in a third and nine, which prompted the Steelers to bring out their new dime look. The Ravens did a nice job of running a pick route, Burnett getting caught behind John Brown and Joe Haden, allowing tight end Mark Andrews to get around the corner for a big 20-yard play.

Later in the first quarter, as the dimebacker, he had middle lane responsibility and ended up drawing wide receiver Chris Moore down the seam.

In reality, it wasn’t bad coverage, but it was a great play from the receiver. Joe Flacco got the pass over Burnett’s head, and he tried to play the receiver. He did get a hand in, but Moore did a good job of playing physical and grasping the ball tight.

His worst play of the day came late in the third quarter. It was once again against the rookie tight end Andrews, drawing coverage down the seam on a third and 10 play from the Steelers’ 17. The veteran couldn’t get his head around and instead had to try to play his body to block the ball. It did bounce off of his facemask, but not before he clearly committed pass interference.

Just to prove that not every single snap he took in the game was terrible, though, here’s an example of him successfully carrying Andrew down the seam. Flacco looked his way but he couldn’t get close to the pass because Burnett was all over it.

Obviously, he played a better game last week against the Cleveland Browns, and I have no reason to believe that he won’t play well again on Thursday night. He’s been doing this long enough, but he’s just getting himself back on the field after injury.