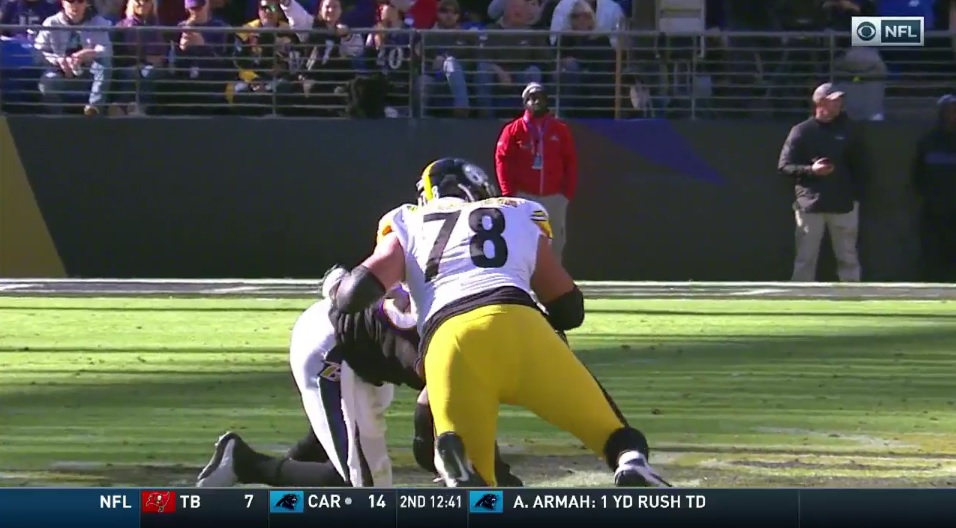 Alejandro Villanueva has had a great year. It doesn’t much matter to me where you want to place him among top offensive tackles in the league. Top eight, top ten, it’s all arbitrary anyway. The fact is, he’s been excellent, changing the tide by getting off to a quick start and playing steady ever since.

That play continued against the Baltimore Ravens. The whole line did a terrific job, as they have all year long, but Villanueva made Terrell Suggs look like an old man, something that’s been rare to see throughout Suggs’ career. One of his most effective moves Villy has in his toolbox is his chop. With his size and strength, he literally cuts down pass rushers who either don’t use their hands or try to long-arm him.

Today, we’re going to check out three examples of Villanueva using that chop to quickly end the battle. And make some good pass rushers look baaaaad.

This is the clearest example of that, the CBS broadcast highlighting the matchup between Villanueva and Suggs. Villanueva pass sets and then gets aggressive with Suggs looking into the backfield. A physical two hand chop on Suggs’ wrists to bring down his hands and doubles the OLB over. Villy then finishes it and buries him.

To be a little fair to Suggs, this was at the end of the play and Ben Roethlisberger was about to release/released the football. So Villanueva was going after this harder than Suggs, who had eyes on the ball. Still, you see the technique and power that not a lot of tackles have.

Couple other examples of it. Harder to see because they’re on the All-22 but we’ve slowed it down for you. Here, ROLB Matthew Judon is trying to win the edge against him. As he looks to bend the corner, Judon stabs with his inside hand to try and take control of Villanueva’s chest and use it as leverage to rip through him.

As soon as Judon reaches out, Villanueva counters by chopping that stab down. It knocks Judon off balance and he falls to the ground. That ends the battle pretty quickly.

Keep in mind not only how Villanueva is attacking him but where he’s attacking him too. He’s not just chopping the middle of the OLB’s arm. He’s chopping the elbow, a joint, that’s more movable than someone’s forearm. Here’s former NFL offensive linemen Scott Peters describing the technique, which he calls “knife.”

“The knife is a single arm trap (or chop), and it works best when it lands on the radial nerve located on the lateral side of the forearm just below the elbow joint. If you are getting a steady diet of the Long-Arm, the Knife technique is a good option, especially when the defender’s hand is fit on your low sternum. It is important to note, that this technique is best when you don’t raise your arm before chopping down. This will inevitably raise your center of gravity, and could result in you getting run over.”

Similar outcome here. Villanueva punches as Tyus Bowser engages off the snap. Bowser begins to set up his rush with a long-arm, stabbing with the inside hand and trying to overpower the tackle backwards with strength/leverage (think Khalil Mack, here’s a great example of it).

As soon as Bowser tries that move, Villanueva counters again. Chop the elbow with the inside arm and it sends the rusher sprawling down. Game. Over.

It’s a rare trait that no one else along the offensive line really has. Sometimes, it can get him into trouble. Defenders know that’s one of his favorite moves and if Villanueva is too aggressive, they’ll successfully counter. He’s a clip of Michael Bennett burning him from early in his career. It’s also a lot of fun to watch the chess match that happens between rusher and tackle in the matter of seconds. How the OLB engages, attempts a rush, and Villanueva has to deploy his counter in an instant. Lot of moving parts in such a short time.

But over time, Villanueva has refined his technique and maybe been a little more selective about when to use it. And it’s playing out to be, by far, the best season he’s ever had and well worth the contract extension he received two seasons ago.