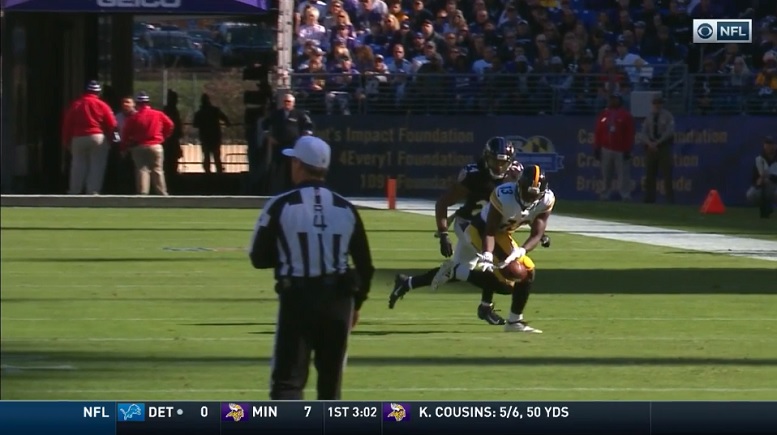 While rookie Pittsburgh Steelers wide receiver James Washington did get back on the field this past Sunday against the Baltimore Ravens after being seemingly benched in favor of veteran wide receiver Justin Hunter in the team’s Week 8 game against the Cleveland Browns, the team’s second-round draft pick this year out of Oklahoma State still only managed to catch two passes for 17 yards in the team’s key AFC North win.

The first of Washington’s Sunday targets from quarterback Ben Roethlisberger against the Ravens came in the first quarter and it wound up being an incomplete pass on a short out route. After that play, which included the football going through Washington’s extended lowered hands and hitting his knee, was over, Roethlisberger had a quick conversation with the rookie wide receiver.

“After that first incompletion, I said something to him and you see he responded well,” Roethlisberger said Tuesday when asked if he finds himself at times telling young wide receivers to hang in there and be patient with a little coaxing. “A little bit, but you can only have some much of that, right?”

Ben Roethlisberger talks about the use of no-huddle, recovering on a short week and James Washington's development. pic.twitter.com/0wZcpmzraQ

While Washington may have responded well on Sunday to whatever Roethlisberger told him after that first incompleted throw his way, he still only managed to make two receptions on his four remaining targets. Both of those completions, however, were short out-routes to the sideline and he’s yet to catch a deep pass from Roethlisberger this season and that’s starting to be a bit alarming being as he made a habit of being a deep pass catcher during his four years at Oklahoma State.

Roethlisberger was later asked on Wednesday if he finds himself being tougher on Washington, or tougher on rookies in general, as he’s gotten older.

“I don’t know, maybe when you see the potential,” Roethlisberger replied. “But he’s a really good kid. He’s a guy that works hard, you don’t really have to get on him. I think he gets on himself enough. I think it would be one thing if he came in here with a different kind of an attitude, but that’s not who he is so that is really beneficial for him and all of us.”

Roethlisberger was also asked on Tuesday to explain the growing pains that Washington has been going through so far during his rookie season even after all the training camp and preseason buzz that surrounded him and if there’s a reason why sometimes wide receivers are the ones that specifically have to go through such.

“Well, like it’s real,” Roethlisberger said. “Like, training camp is you’re not really getting tackled. I mean, you are, but you’re not. You’re going against different defenders and I think for him the toughest part is playing one side. In college he played one side of the ball and I don’t think colleges, if you watch college football, I feel like offenses are being simplified in a sense that they are all looking to the sideline. It seems to be screens, they aren’t running the whole route tree – it doesn’t appear to be that way. So, I think quarterbacks and receivers come in with a disadvantage in the NFL level. So, it’s different, but I think he’s learning and he’s not asking questions, which is a good thing.”

I mentioned quite a bit after Washington was drafted that a huge majority of the offensive snaps he played in college came with him on the right side of the formation and lined up outside wide. Additionally, Washington came from a college offense that was a very high-tempo one that also ran a very high percentage of run/pass option plays. While Washington did run a nice route tree selection in college, there was still plenty of room for it to expand at the NFL level in addition to the overall quality needing to be improved upon.

It will now be interesting to see if Washington can show remarkable improvement and increased production during the second half the season which starts Thursday night at home against the Carolina Panthers. Roethlisberger, by the way, hinted on Tuesday that we could see the Steelers offense run more no-huddle Thursday night against the Panthers as a byproduct of it being a short week. The Steelers quarterback was then asked if he feels comfortable with Washington possibly being part of a heavy no-huddle game plan and he balked a tiny bit in his response.

“Yeah, I thought he played well last week,” Roethlisberger replied. “Well enough, but that’s not my call. Whoever’s in there at that position I’m sure will be ready to go.”

Will Washington even dress Thursday night against the Panthers, or will we see Hunter back on the field for this game? Perhaps the Tuesday injury report will shed a clue or two for the correct answer to that question as Washington is supposedly dealing with a very minor knee issue coming out of Sunday’s game against the Ravens. If the rookie doesn’t practice fully on both Tuesday and Wednesday, he might just find himself on the inactive list again Thursday night.