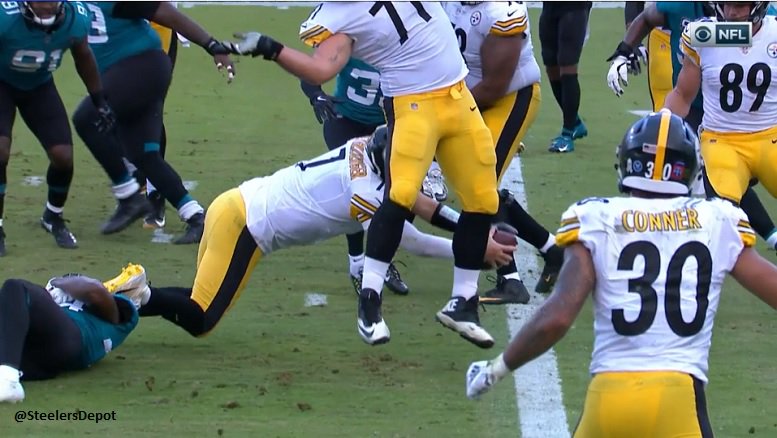 While Pittsburgh Steelers quarterback Ben Roethlisberger certainly didn’t have a great overall game Sunday against the Jacksonville Jaguars, he still managed to lead the offense on a 7 play, 68-yard game-winning drive that culminated with him scoring on a run from a yard out with 3 ticks left on the clock. According to the Steelers PR department, that score was Roethlisberger’s 45th game-winning drive of his NFL career (41 regular season/4 postseason).

Sunday’s game-winning drive against the Jaguars was Roethlisberger’s second of the season as he also had one back in Week 7 against the Cincinnati Bengals. That 7 play, 77-yard touchdown drive culminated with Roethlisberger connecting with wide receiver Antonio Brown on a quick slant from the Bengals 31-yard-line. The drive took 1:08 to complete.

Roethlisberger was 3 of 6 passing for 66 yards in Sunday’s game-winning drive against the Jaguars. One of those 3 incompleted passes was a drop by running back James Conner while another one came on via a spike to stop the clock.

Below is the list of game-winning drives that Roethlisberger has had so far during his career, according to the Steelers. However, right away it jumped out at me that his 2-yard touchdown pass to tight end Heath Miller in the 2007 Week 10 home win over the Cleveland Browns was missing. That play you can see below. Instead, the Steelers have Roethlisberger’s 30-yard touchdown run listed.

#Steelers QB Ben Roethlisberger (@_BigBen7) recorded the 41st regular-season game-winning drive of his #NFL career on Sunday, breaking a tie with John Elway for the 6th-most such drives since 1960:

Not sure why, but my idiot servant brain went right to noticing this play missing from that list: #Steelers @_BigBen7 pic.twitter.com/LhX2JYJaX6