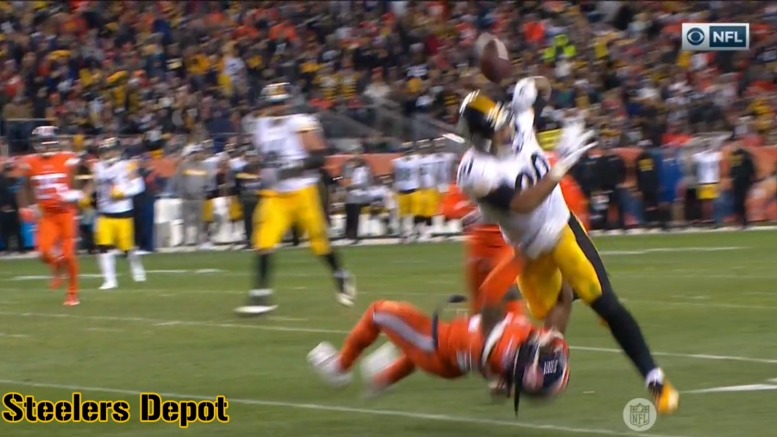 Since 2000, NFL teams have gone 398-14-1 in games in which they had a plus-four turnover differential heading into today’s game between the Pittsburgh Steelers and the Denver Broncos. So it wasn’t exactly bucking any trends when Pittsburgh lost the game after coughing the ball up four times and failing to get it back even once.

There is certainly no disputing that the turnovers were the deciding factor in this game, especially considering that two of them happened right at the goal line. Not even factoring in a blocked field goal on the opening drive, the Steelers then followed up by screwing themselves out of a touchdown off of a play-action pass to Xavier Grimble.

As the third-string tight end lowered his frame to make contact with the safety at the goal line on the explosive play, he lost possession of the football at the one, and the ball spilled out of bounds through the end zone, which resulted in a turnover and a touchback for the Broncos. It should have been 10-3 at that point, but instead they had nothing.

While the Steelers managed to pull even by halftime, and even took the lead about five minutes into the second half, they turned the ball over three more times on their final five possessions, beginning with an interception at midfield by Ben Roethlisberger.

The Broncos promptly marched down the field with two big plays from former Steeler Emmanuel Sanders to get seven points off of the turnover. Two drives later, following a James Conner fumble at the end of a big gain on a screen pass, Denver again followed up that possession by going the distance and putting points on the board, taking the lead on a Philip Lindsay score.

Even with all that said, the offense was consistently moving the ball down the field all day, so there was reasonable hope for another game-winning drive, or rather a comeback. They managed to get all the way down to the two before Roethlisberger threw his fourth red-zone interception of the season, the third-down pass snagged by a defensive lineman.

Over the past two games, Roethlisberger now has five interceptions to three touchdown passes. Even with a ton of passing yardage in that span, the offense is clearly and demonstrably falling off from where they were previously.

They headed into last week’s game averaging over 30 points per game, but have only scored 37 combined in the two games since. Of course two of today’s turnovers weren’t his—and one directly took away a touchdown pass—but the point is that the team as a whole has been leaving too many plays on the field.

Expecting to be able to overcome a minus-four turnover margin under those circumstances is foolhardy at best. And the blame lies on both sides of the ball. The defense has not been getting takeaways either.