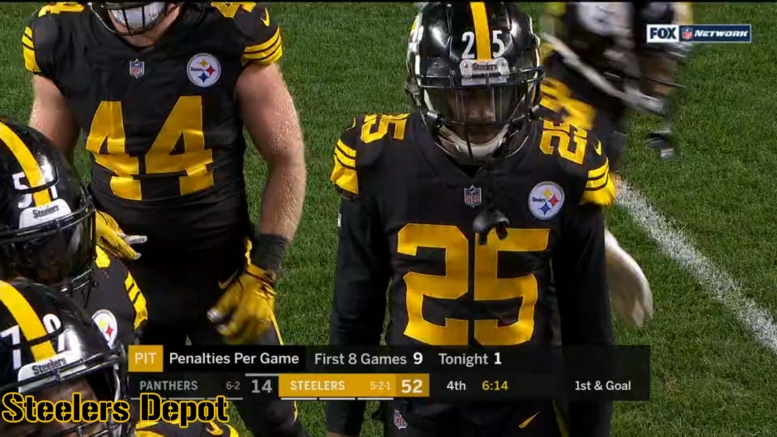 Somewhat amazingly given their track record so far this year, the Steelers were indeed only penalized one single time last night against the Carolina Panthers, and that penalty did not happen until the team had already benched as many starters as they could, coming at the 6:21 mark of the fourth quarter.

By that point in the game, Burns was only playing as one of those substitutions in a 52-14 blowout at the time, lining up with the likes of L.T. Walton, Tyler Matakevich, and Jordan Dangerfield also on the field along with him, as well as Anthony Chickillo and L.J. Fort.

The Panthers had by the start of that drive not even registered a first down during the second half, but with the defense sitting many of its best players, they did start to move the football. They got down to the Steelers’ 25-yard line when Burns—naturally, unnecessarily—committed a pass interference penalty against D.J. Moore in the end zone. They would score two plays later to make it 52-21.

But that’s not the story. The story is that the Steelers were not flagged in the 53-plus minutes leading up to that moment, nor in the six-plus minutes that followed. The Steelers, who came into the game as the most penalized team in the league, including standing head and shoulders above everybody else in special teams penalties, were only flagged one single time on the night.

Was this an aberration or a sign of improvement? Perhaps somewhere in between? It’s not exactly common for a team to only be penalized once in a game, and that is something that could vary pretty wildly depending on which officiating crew is calling the game, as some are much more trigger-happy than others.

But if past seasons are any indication, we should be beginning to see the team playing cleaner football. They have been among the most-penalized teams in recent years in the early parts of seasons, only for them to finish somewhere in the middle of the pack, or even among the least-penalized.

I don’t know how or why, but the Steelers perhaps more than any other team in the league get better and better as the season goes along, when they often don’t even look like a very good team at the start of the year. It’s frustrating in September, but usually forgotten about by mid-late November.