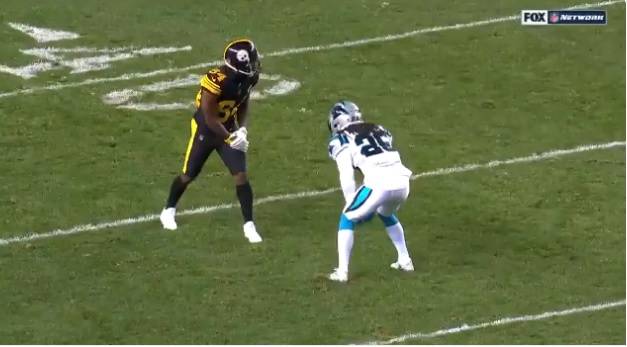 The Pittsburgh Steelers defended their home turf and laid a beatdown on the Carolina Panthers, defeating Ron Rivera’s team 52-21. What looked to be a shootout, turned into a blowout as the Steelers set a new franchise record as their 52 points were the most ever scored at Heinz Field.

On the Steelers’ first play from scrimmage, Ben Roethlisberger connected with wide receiver JuJu Smith-Schuster on a 75-yard pass down the sideline to tie the game at seven. Then on the very next play, the Steelers would take the lead as an errant throw by Newton fell into the hands of linebacker Vince Williams, who returned it 17 yards for a pick six.

And just when the Panthers thought it could not get any worse, the Steelers added another seven points to their lead on their ensuing drive and who else but running back James Conner to score the touchdown. Conner’s two-yard plunge would be his 10th rushing touchdown and 11th total touchdown of the season. Conner finished with 13 carries for 65 yards and one touchdown. The running back spent some time in the medical tent for an evaluation and was later removed from the game due to the Steelers’ big lead.

With Smith-Schuster and Conner getting in on the scoring, it was only a matter of time before wide receiver Antonio Brown decided to join in on the fun. Roethlisberger found Brown on a 53-yard pass down the right sideline to put the Steelers ahead 31-14 before halftime. Brown, who earlier today was cited for going 100mph, sure did flash his speed sprinting down the sideline and away from Panthers defenders all night long. The touchdown was Brown’s 10th of the season and gave him 96 receiving yards on the night.

All of the offense’s success can be pin pointed towards Roethlisberger, as he was literally perfect on the night. Big Ben completed 22/25 passes for 328 yards and threw for five touchdowns, giving him a 158.3 passer rating. Along with his touchdown passes to Smith-Schuster and Brown, Roethlisberger also connected with Vance McDonald, Jesse James and Jaylen Samuels. This would be the first touchdown of Samuels’ NFL career and the running back was one of nine receivers that Roethlisberger completed a pass to.

The Steelers defense stopped any opportunity the Panthers had to climb back into the game by negating both the arm and legs of Newton. The Panthers’ quarterback constantly saw his pocket collapse as the Steelers’ pass rush swarmed him all afternoon. The Steelers totalled five sacks, sharing the wealth among their pass rushers. Cameron Heyward got two, Vince Williams got another, T.J. Watt got one himself and Bud Dupree added to his total as well.

Josh Dobbs also stepped in for the second consecutive game as Roethlisberger was rested late.

The Steelers will now have a week and a half to prepare for their upcoming road trip to Florida against the Jacksonville Jaguars. Head Coach Mike Tomlin will look to continue the Steelers’ winning ways as they hope to avenge their playoff loss to the Jaguars last post season. Kick off is set for 1 p.m. EST on November 18.