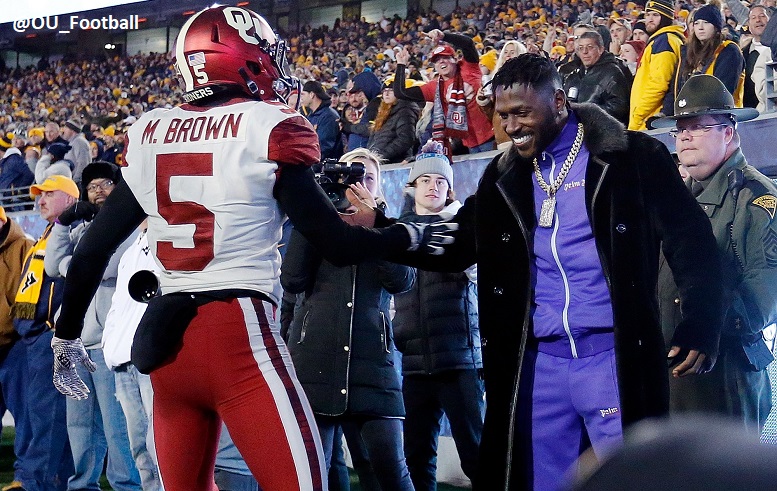 In case you missed it Friday night, Pittsburgh Steelers wide receiver Antonio Brown was present for the Big 12 shootout game between West Virginia and Oklahoma that ended with the latter winning 59-56. Brown, who came dressed in a purple jumpsuit, was in Morgantown, West Virginia to watch his cousin, Oklahoma wide receiver Marquise Brown, play and he certainly got his money’s worth.

Marquise Brown ended the Friday night game with 11 receptions for 243 yards and 2 touchdowns and you can see highlights of his performance below.

The younger Brown is now wrapping up his junior season at Oklahoma and it will be interesting to see if he declares for the 2019 NFL Draft as an underclassman in the next few months. Based on what he’s already put on tape the last two seasons, it wouldn’t be surprising to see him go that route. In the meantime, however, he and Oklahoma will now start preparing to play Texas in the Big 12 Championship game that will take place a week from today.

In case you weren’t aware of it, Steelers general manager Kevin Colbert was present for the Friday night game between West Virginia and Oklahoma as well, according to NFL draft analyst Dane Brugler.

.@AB84 wanted his cousin Marquise to get in there! 😂 pic.twitter.com/a0PYAauJjz

NFL heavy hitters in Morgantown tonight for #Oklahoma at #WestVirginia: