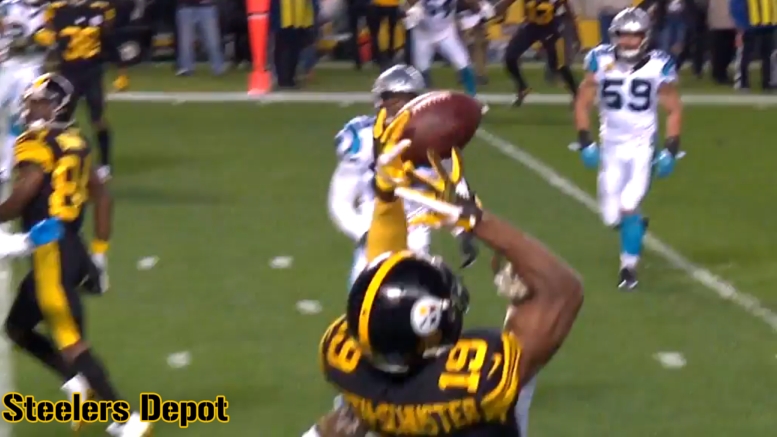 I recently saw a graphic, which I can unfortunately not locate at this time, that listed the drop percentages for every starting quarterback in the league so far this year, and it was no surprise that Pittsburgh Steelers quarterback Ben Roethlisberger has been one of the more fortunate in the league in terms of his targets putting catchable balls on the ground.

While the determination of a drop has a high degree of subjectivity in many circumstances, I think most are clear enough to bring about a pretty universal agreement, so I think the overall accuracy of a single-sourced evaluation would be reasonably accurate. From memory, Roethlisberger was in the top 10, maybe even top five, in terms of the fewest percentage of passes being dropped, which was something like 2.3 percent.

That shouldn’t be any surprise to those of you who have been following our dropped passes report this season, as I rarely feature more than two or three plays per week, and in many cases I ultimately conclude that the play in question was not a drop.

In revisiting the Steelers’ blowout victory against the Carolina Panthers, Roethlisberger only attempted 25 passes, and he completed 22 of them, so there were only three pass plays on which there was even the potential for discussion of a drop—barring some atypical ricochet incident, which was never the case.

Of the three incompletions, I identified only one that was even worthy of discussion, which was on an intermediate throw into the end zone targeting JuJu Smith-Schuster from the Panthers’ 12-yard line. The receiver was defended well by cornerback Captain Munnerlyn on the play.

If you do look at the replay, however, it does appear in my evaluation that Smith-Schuster did have at least an opportunity to make a reception on the play. He was able to get two hands on the football above his opponent.

There is never one clear shot even in very slow motion that displays without a doubt that Munnerlyn even got a fingertip on the football. On the other hand, he did commit pass interference before the ball even arrived, which was not called, which is one of the reasons that I did not mark this outright as a drop but only as a notable play.

And one could observe that even if he had initially secured the ball, Munnerlyn was able to pull down the receiver’s farside arm, which may well have prevented him from completing the catch anyway.

Roethlisberger may have been ‘perfect’ on the day, but no quarterback can have such a game without his targets stepping up and doing their job. That’s what he got from his group last Thursday night, which is why I had to scrounge for something to write about in this column this week.