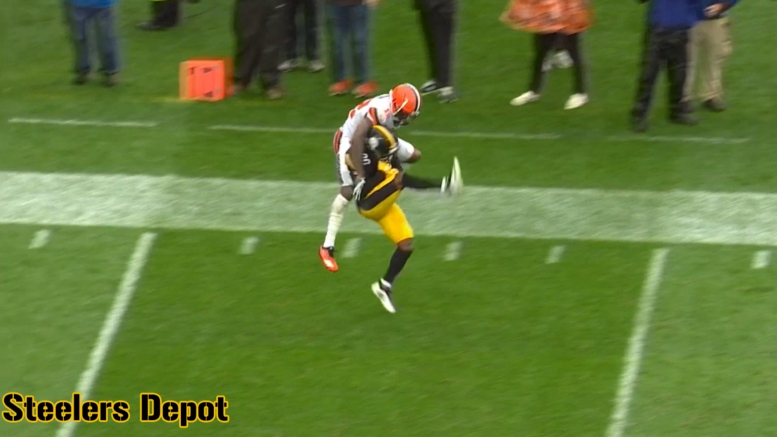 Question: If Coty Sensabaugh doesn’t play on Sunday, how many snaps if any will Cameron Sutton play at right outside cornerback?

I presume that we are all caught up on the story by now, especially as it concerns young Artie Burns, the third-year, 23-year-old cornerback who was supposed to be a full-time starter by now well on his way toward cementing himself as one of the Steelers’ top defensive players.

While he was benched entirely on Sunday, we learned after the fact that that was a coach’s decision based on disciplinary reasons, and not performance. Mike Tomlin in fact even stressed that he had a good week of practice. And yesterday he worked with the first-team defense.

So with Coty Sensabaugh nursing a toe injury that he suffered against the Browns, Burns figures to get his job back, but the question then becomes what approach the coaches take there. Do they let Burns take all the snaps, as the plan was for Sensabaugh on Sunday, or do they continue to take a rotational approach by adding Sutton into the mix?

With Morgan Burnett back on defense to take on the dime snaps—the team introducing a new dime look on Sunday that was effective—Sutton doesn’t really have much for himself to do, even though he had been playing a good number of snaps this year.

He is a young player that the Steelers want to get work for, if not simply for the sake of his continuing development, so they could make the decision to rotate him in with Burns. Or they could decide that it’s time to throw Burns back into the fire and see how well he can take the heat.