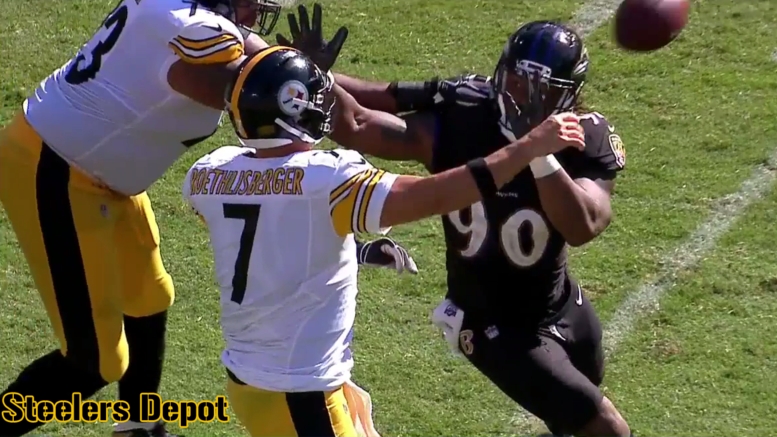 Today is the 10th game that quarterback Ben Roethlisberger will start against the Ravens in Baltimore. The first game of his career actually came in Baltimore when he replaced an injured Tommy Maddox and never looked back. He threw two touchdowns but the team still lost 22-20. They wouldn’t lose again until the AFC Championship Game.

Things haven’t gone so well for him in his first nine starts in Baltimore, however. The Steelers are just 3-6 in those games, though that also include the most recent, the only convincing win in Baltimore since Roethlisberger has been here, last season’s 26-9 commanding effort.

But even in that game, he only completed 18 of 30 passes for 216 yards, throwing for one touchdown to one interception, averaging 7.2 yards per attempt (the only Baltimore start in his career with seven or more yards per attempt) and a quarterback rating of 79.3.

Roethlisberger has only had three 300-yard games in the 22 total games he has played against the Ravens, and none of them have come in Baltimore. But he is averaging comfortably over 300 yards per game this season, whether at home or on the road.

In only one game in Baltimore has he ever thrown more than a single touchdown pass. That came in 2013, during which he completed 28 of 44 passes for 257 yards, and he didn’t throw an interception. It was the only game in which he posted a quarterback rating above 90. His second-highest was 81.9.

For his career in Baltimore, Roethlisberger averages only a 57.7 completion percentage. He averages just 6.2 yards per attempt, with seven touchdowns to 11 interceptions, and a quarterback rating just south of 70. Will he get his fourth win in 10 tries today, and will he actually put up strong numbers?