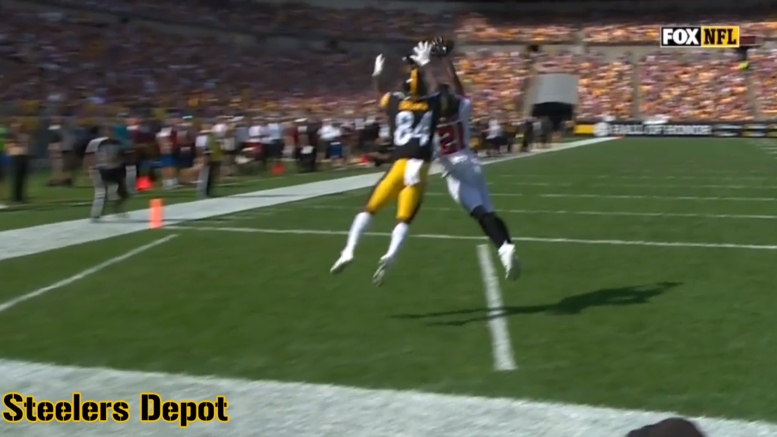 One of the things I’ve liked to do over the course of the past couple of years is to take a closer look at aerial ball security in terms of quarterback play. Not every interception is a quarterback’s fault, but not every pass that can or should be intercepted actually gets picked off.

This is something that has become known as the turnover-worthy throw, which eliminates interceptions that are not the fault of the quarterback but also exposes throws that were seriously vulnerable to interception. I’ve been tracking this for the Pittsburgh Steelers since last season and presenting them in quarterly installments. Below is the second quarter of the season’s turnover-worthy throws, from games five through eight. I captured nine plays worthy of discussion here.

The first of these plays came late in the first quarter against the Atlanta Falcons. Ben Roethlisberger was looking for Jesse James on a deep post route, but failed to account for the safety, who nearly cut in front of the ball for the interception. A caveat here is that the coverage back committed pass interference, so it resulted in no play officially, but it’s the throw itself we’re looking at, and the penalty did not affect the safety’s ability to jump the throw.

The Steelers drove into the red zone at the end of the second quarter, and then Roethlisberger proceeded on back-to-back plays to throw poor balls to Antonio Brown. The first was nearly intercepted by Desmond Trufant, who played good one-on-one coverage on the out-breaking route.

The second was intercepted, tossed into what ended up being at least double coverage and picked off by the secondary defender.

A week later against the Cincinnati Bengals, Roethlisberger had just one turnover-worthy throw about five minutes into the second quarter. As he looked for James over the middle, he missed Vontaze Burfict patrolling that portion of the field, who got two hands on the ball but couldn’t secure it.

The first of three arguably turnover-worthy throws for Roethlisberger against the Cleveland Browns after the bye week came 10 minutes into the game as he forced a pass to JuJu Smith-Schuster that saw Christian Kirksey jump in front of. It bounds off the linebacker and was picked off by safety Derrick Kindred.

Another case up for discussion is a late first-half target to Smith-Schuster on a pass to the sideline from the far hash mark in which cornerback T.J. Carrie had underneath coverage. The wide receiver had to turn defender here, which is easier to tell if you slow down the gif. There was no replay provided for his play unfortunately.

Sometimes even a touchdown can be a turnover-worthy throw, as Roethlisberger’s one-yard score to Brown was at the end of the first half of that game. Safety Damarious Randall sensed the screen and tried to jump the play, but the pass went through his hands. The replay shows that he did touch it, slightly altering its trajectory and rotation.

Roethlisberger had two more turnover-worthy throws last Sunday against the Baltimore Ravens, again on a target to James. This was a first-and-10 play inside the red zone on which he simply tried to do too much, extending the play and trying to find a target. C.J. Mosley nearly was able to take the ball as he undercut the route on a pass thrown behind the tight end.

The final turnover-worthy throw was actually a batted pass, with linebacker Matt Judon getting great height to swat a screen pass down behind the line of scrimmage. But he got so much of the ball that he actually nearly picked the pass off himself, getting two hands on it but struggling to close on the ball with coordination. Of course that’s tough to do unpredictably and in close range.

Roethlisberger only threw two passes that were intercepted during this four-game span, but I account for nine passes that could have resulted in interceptions based purely on the pass itself. A couple were failures by a defender to complete the play, others factor in the receiver preventing the play. There may be some disagreement about which of these should be considered truly turnover-worthy, but that’s the purpose of presenting as many examples as possible.