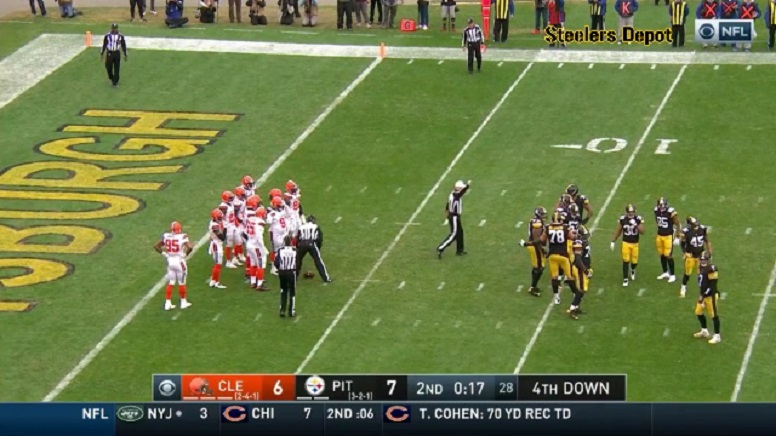 Thanks to the officiating crew on Sunday the Pittsburgh Steelers received a small gift of yardage at the end of the first half of their game against the Cleveland Browns and if you watched the game, you know exactly when that present was given to the home team and the significance of the crew who delivered it.

With 35 seconds remaining in the first half and the Steelers offense having already driven deep into Cleveland territory, Pittsburgh running back James Conner was given the football on a 3rd and 2 play from the Browns 5-yard-line and he did good to get back to the exact line of scrimmage prior to being tackled by linebacker Christian Kirksey.  After the pile of players had been sorted out the referees looked a bit confused as to where the football needed to be spotted with the game clock slowly ticking away.

The football was finally spotted well within the Browns 4-yard-line and that set up a 4th and 1 situation for the Steelers, who had by then taken their second timeout to stop the clock. The Steelers offense stayed on the field with 15 seconds remaining in the half and converted the 4th down opportunity via a quick slant to the right side for 3 yards from quarterback Ben Roethlisberger to wide receiver JuJu Smith-Schuster. The play that followed that one was the quick pass to the left side to wide receiver Antonio Brown for a touchdown.

Had the football been spotted correctly after the 3rd down run by Conner, it would have likely been right at the Browns 5-yard-line which would have then set up a 4th down and a long 2 yards to go. Would the Steelers offense still had gone for it on 4th down? Would they still have run the same slant pass play to Smith-Schuster? Probably, but I can’t say that with certainty.

The other thing that needs to be mentioned in regard to that poor spot is that the down judge for that referee crew on Sunday was Michael Spanier. Spanier, in case you missed the news this past week, was assigned to the crew led by referee Carl Cheffers to replace Hugo Cruz, who had been fired for making numerous errors, including missing a false start against Los Angeles Chargers tackle Russell Okung before a touchdown against the Browns just a few weeks ago.

The CBS broadcast crew for Sunday’s game between the Steelers and Browns, Ian Eagle and Dan Fouts, highlighted the ball placement error by the officiating crew at the beginning of the third quarter.

The Browns obviously will be thankful not to see Cheffers’ crew anymore this season and here’s to hoping that none of that crew winds up getting playoff assignments.