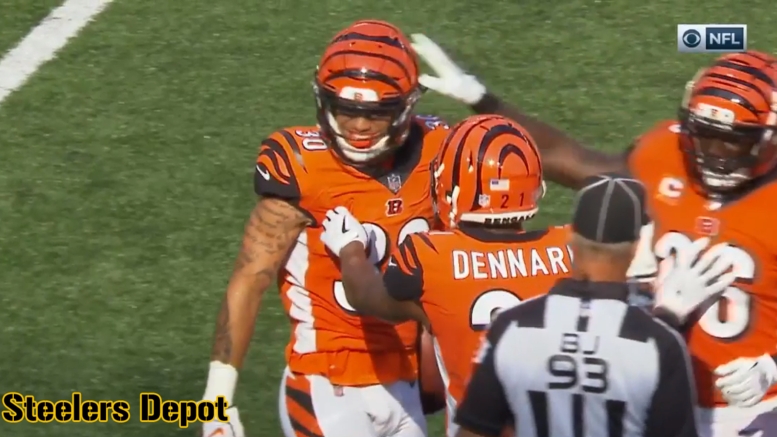 As many Pittsburgh Steelers fans who closely follow the draft are aware, the Cincinnati Bengals have created a habit of drafting defensive backs that their AFC North rivals have expressed a lot of interest in during the pre-draft process, including those that became fan favorites before they were even a part of the team.

The most notable example was William Jackson III, whom the Steelers were reportedly all set to draft in 2016 before the Bengals drafted him one slot ahead of him. They ended up adding Artie Burns instead, who had three interceptions his rookie year while Jackson was on IR. Since then, the latter has become one of the best young cornerbacks in the league while Burns is just trying to get his job back.

“Can’t say enough about William Jackson and his quality of play at this point”, Head Coach Mike Tomlin said of the third-year defensive back during his pre-game press conference yesterday. “He’s playing really good ball, using his length and competitive nature and really getting after people and playing really good at the right corner spot”.

But he’s not the only one the Bengals have added. While it’s unlikely Pittsburgh would have ended up drafting him since they already selected Terrell Edmunds in the first round, safety Jessie Bates is another player the Steelers scouted heavily before the draft, and whom a lot of fans wanted to see on the team.

“They have a new free safety in Bates. Very familiar with him”, Tomlin said. “You know we were in the safety market. Prior to the draft, was at his Pro Day, had an opportunity to spend some time with him. He’s a ballhawk centerfielder. He’s got good vision, got great hands and feel for the game. I think that can be reflected already in his production”.

Both Edmunds, assuming he is healthy, and Bates should be in the starting lineup for their respective teams on Sunday. Bates was named the starter outright after the Bengals released veteran George Iloka, but Edmunds’ opportunity has come via injury to Morgan Burnett.

On the season, Bates has two interceptions with two passes defensed to go along with 32 tackles. He got his second interception of the season on Sunday against the Miami Dolphins in a big come from behind win that put them at 4-1 for the year.

As for Edmunds, he has started four of five games so far, though he rotated in the first two games. He has recorded 19 tackles—14 over the past two games—with one interception and two passes defensed.

Fans in particular have a tendency to make long-term comparisons between players drafted by rivals. Edmunds and Bates will likely be one pair, especially since many fans didn’t believe that Edmunds was worth a first-round pick.