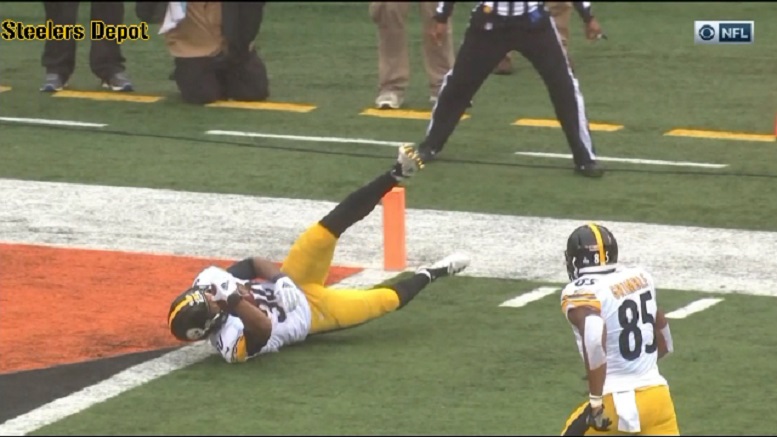 Even though the Pittsburgh Steelers managed to beat the Cincinnati Bengals on the road on Sunday there’s sure to be a lot of talk during the bye week centered around play challenges and head coach Mike Tomlin.

In the second quarter of Sunday’s win, Tomlin seemingly foolishly decided to challenge the spotting of the football following a marked 7-yard reception by wide receiver Ryan Switzer on a 3rd down and 8 play from the Steelers 12-yard-line with 9:23 left until halftime. Replays showed that Switzer, while close to shaving enough yardage for a first down, was noticeably short of it. The failed challenge by Tomlin then cost the Steelers one of their timeouts.

Later in the game, Steelers running back James Conner ripped off a long run around right end midway through the third quarter and while the referee marked him down at the Bengals 1-yard-line following a tackle by Cincinnati safety Jessie Bates, replays certainly appeared to show that the football broke the plane of the goal-line prior to the Pittsburgh player being down.

Tomlin, however, chose not to challenge the spotting of the football. The Steelers offense then proceeded to not score a touchdown in their next three plays and thus had to settle for a field goal by kicker Chris Boswell. That was a huge failed red zone trip for the Steelers and it would be magnified greatly had the Steelers ultimately lost the game.

After the game was over, Steelers head coach Mike Tomlin was asked during his press conference why he chose not to challenge the spot of the football after Conner was marked down at the Bengals 1-yard-line.

“I didn’t see it,” Tomlin said. “You know, you don’t get opportunities at replay in visiting stadiums.”

“Ok, I get that Tomlin didn’t see the replay, but what about another coach upstairs? What about Art Rooney II in the luxury box? What about me sitting in my mom’s basement? Wasn’t there somebody who could have immediately given Tomlin some feedback and suggest that he challenge the spot based on television replays? After all, did he just go with his gut on the Switzer challenge?

With the Steelers on a bye next week it might be a week from Tuesday until he next talks to the media. If that’s the case, I hope someone from the media asks him about the process of challenging plays in a visiting stadium where replays aren’t a luxury for him to see.