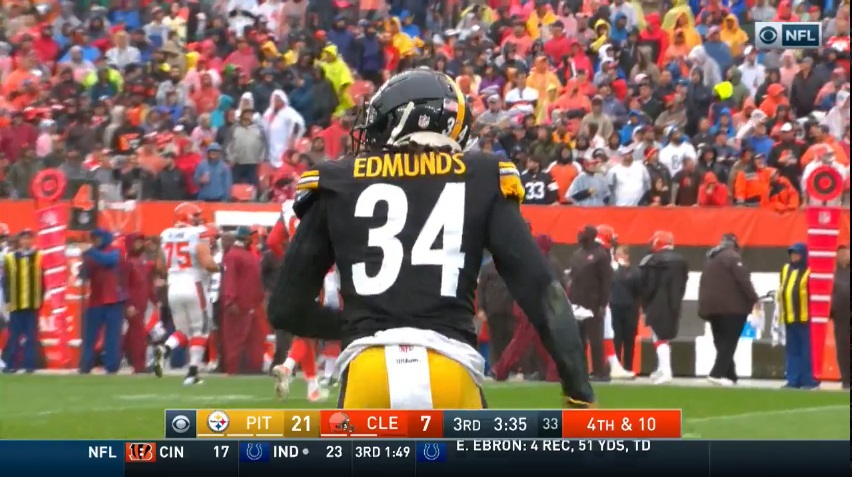 There’s about a billion changes NFL rookies have to experience. A new city, playbook, scheme, coaches, pressure, and those are just the obvious ones. But Terrell Edmunds pointed out a more subtle one today that, unless you’re actually putting on the helmet each Sunday, you’re probably not going to realize.

He’s already played ten games this year – four in the preseason, six in the regular season. In any other year of his football career, his season would almost be over. And in college, there were multiple bye weeks and time off to recharge and get your body right. So the fact the Pittsburgh Steelers bye week is coming now is a perfect time for Edmunds and the rest of the rookie class.

“We’ve been nonstop ever since last college season,” Edmunds said via the team site. “We’ve been going straight into draft workouts, then rookie mincamp, then camp, and now we’re in the regular season. Now we’ve already played ten games. It’s like our whole college season is done now. But we still have a lot of football left. So I’m definitely ready and prepared. Glad we got this bye week at the time we did. Now we can recuperate and just get back.”

Edmunds has played 495 snaps this season, more than anyone else on this Steelers’ roster, offense or defense. Expand that to the entire NFL and he’s played the second most of any player in the league, trailing only Baltimore Ravens‘ center Matt Skura.

His 389 snaps defensively are second most, trailing only Sean Davis, while having an active role on special teams too, including being part of the kick coverage unit before moving to his strong safety spot (putting him on that unit is certainly debatable).

So yeah, a break is much-needed.

He said he’ll spend the bye week going home, relax, study some film, and hopefully sneak in a couple of home-cooked meals.

Given Morgan Burnett’s questionable return even out of the bye, Edmunds will be counted on plenty for the rest of the season. Even if Burnett gets healthy, Edmunds may remain the starter, given his acceptable play and improving secondary.

“It’ll be good to let your body get a break. Rejuvenate. Get your body back up to par and be ready to go next week.”

Washington hasn’t logged nearly the snaps as Edmunds but it’ll be a good reset point for him, too. He’s had a slow start to the season and still has to earn the trust and confidence of the coaching staff. As Dave Bryan pointed out on Wednesday’s Terrible Podcast, Justin Hunter replaced him on the final two Steelers’ drives. So he’s looking for a much better finish to the season than the start.