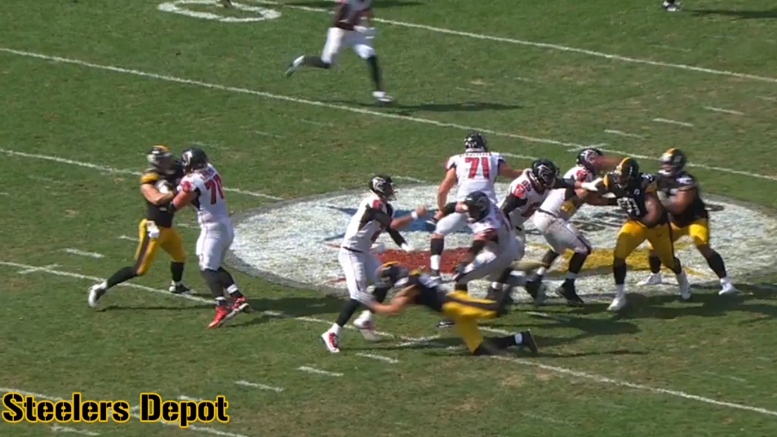 The NFL has made certain types of roughing the quarterback a point of emphasis to police this season in a way that it has never been enforced before, and the end result is that it has seemingly taken everybody off-guard. Five games into the season, players, coaches, officials, and presumably even the NFL itself, is still trying to figure out how to adjust to it.

One of the latest players to be hit with a roughing the passer penalty that was called into question was Pittsburgh Steelers outside linebacker T.J. Watt, who on Sunday was able to bring Atlanta Falcons quarterback Matt Ryan down for a sack three times during the team’s win.

That was likely the primary penalty that Head Coach Mike Tomlin was referring to in his post-game comments when he called some of the officiating penalties “a joke” and left him “pissed off”. Watt, a day later, had more diplomatic words about his infraction.

“When I was falling, I tried [to hold off]. At the end I tried to pull off, but when you have momentum like that it’s very hard”, he told reporters. “I’ll take a penalty, it’s my bad, I’ll take a fine, whatever. I understand it. But it puts us in a bind because I don’t know what else I can do. I couldn’t have rolled off or I’d risk hitting someone in the knees or risk hurting myself, so, it is what it is”.

T.J. Watt said he attempted to move off Matt Ryan on his roughing the passer call, wasn’t sure what else to do. pic.twitter.com/I5guG8mDDT

He did receive the penalty, following a seven-yard pass on second and 11 at the Steelers’ 48. The penalty put the Falcons in field goal range, and they ultimately got to the 14 before a pair of sacks—one by Watt—forced them to settle for a 47-yard field goal from the 29.

The question that remains now is whether or not Watt will be fined later on in the week. There has been much uproar this year especially about three roughing the passer penalties against Clay Matthews, but he was not fined for any of them, which indicates that the league agrees that those instances were over-officiated.

That is at least partially good news, but the issue now is getting the officials on the same page. Their job is not easy, asked to make flash judgements without the benefit of having access to replay for such penalties, so I don’t envy them.

If things continue this way, I think it will be an inevitability that the league has to make roughing the passer penalties and similar infractions eligible for review. If they want to protect players and have officials afraid not to call them, there needs to be a self-correcting mechanism available in real time.