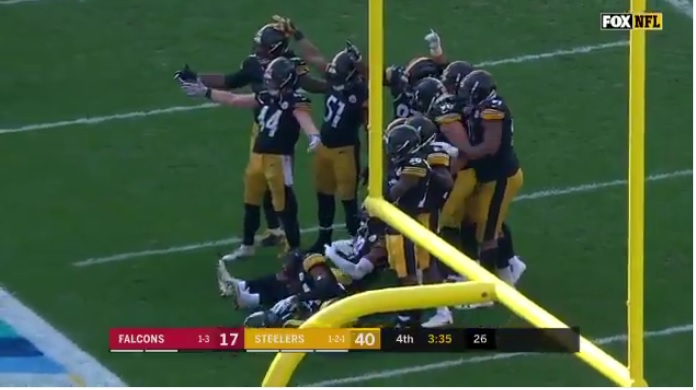 It’s a good day to have a good day, isn’t it? Steelers vs Falcons winners and losers.

Joe Haden: Largely responsible for Julio Jones being shut out until well into the second half, the Steelers shadowed him with Haden today, something they rarely do. He was excellent, even if the stats won’t show it. That’s what good cornerbacks do.

Pass Rush: That’s what the Steelers have been searching for since the Browns game. Having the lead and letting your pass rusher pin their ears back sure helps but guys won up front. T.J. Watt, Cam Heyward, and Mike Hilton off the edge all played a big role in sacking Matt Ryan six times. Watt was great, so special mention to him, but wanted to acknowledge the entire pass rushing unit.

James Conner: Offensive coordinator Randy Fichtner said the team needed to get back to the run game. They sure did. Conner ran hard, downhill, and got more than just what was blocked. Proved again to be an asset as a receiver, including a long third down screen he converted. So difficult for defenses to bring him down in space.

And of course, anytime you run as effectively as the Steelers did, big credit to the starting five up front.

Coaching Staff: As critical as we’ve been of them last week, they deserve a ton of credit this time around. Keith Butler held a red-hot Falcons’ offense to just 17, and made them earn almost everything. Randy Fichtner stayed aggressive even with the lead and special teams was excellent in almost every area. This wasn’t a “must-win” but it close to it. And as the team has done time and time again, they rose to the moment.

Tyler Matakevich/L.J. Fort: Good stuff from both guys, filling in for the injured Vince Williams. Matakevich’s performance was quieter but he was steady against the run and made at least one impressive special teams tackle. Fort was splashier with a sack and fumble recovery for a TD.

Terrell Edmunds: Agree with Dave Bryan’s assessment. Best game of Edmunds’ career. Solid tackling, good range and ability to close. And impressive from a mental standpoint with how rough he was under the lights against Baltimore. Bounced back.

Third Down Offense: Heading into Sunday afternoon, the Steelers were 28th on 3rd down. Last week, they went 2/12 against Baltimore. This week? 9-12, allowing them to keep drives alive and finish them off. Big, big difference.

Jordan Berry: Berry starting to find his groove. A 51 and 55 yard punt to start. The other? Downed at the one.

Antonio Brown: Nice to see him on this list finally. The misses early weren’t his fault, they were on Ben Roethlisberger, but in the second half, AB made them count. His second touchdown was vintage AB. Beat the corner, make the play before the safety can close.

Roosevelt Nix: Gotta give a shoutout to Rosie Nix. Quality lead blocking, springing Conner on his 2nd TD, and that punt block. Which we’re definitely talking about soon because it combined my two favorite topics: punt rushes and Nix.

James Washington: Not many “obvious” losers today. Washington was called for OPI and has largely been quiet to begin his career. Hasn’t been the vertical threat he was drafted to be. Had one pass bounce off his hands today, though it wasn’t a “gimmie” catch.

Bud Dupree: Again, not an awful performance. But in searching for losers, Dupree with two hands to the face calls? Can’t give the opposition first downs like that. Despite the strong pass rush as a team, he went without a sack or even a QB hit.

Ryan Switzer: Switzer seemed to have his role reduced and Jaylen Samuels even logged at least one snap. Maybe a gameplan thing and he was fine in the return game, he’s a steady, trusted presence, but not so much offensively this week.