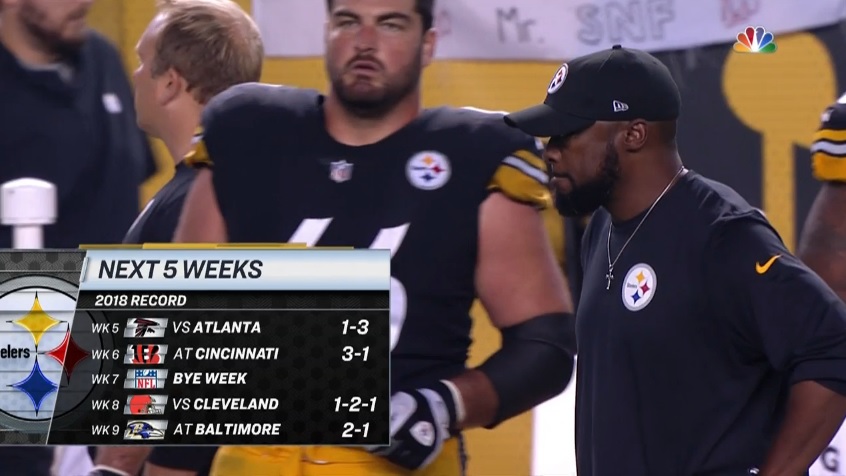 1. The run game gets back in gear.

Not that the Steelers, or any team for that matter, should run the ball for the sake of running it. That’s not balance, even if it looks it in number. But this is an Atlanta Falcons run defense that is as bad as they’ve faced all year and they’re without star DT Grady Jarrett.

Randy Fichtner has already said this team needs its run game to compliment the pass. If James Conner can run for around 100 yards, help chew up clock, and not result in a situation where the defense is totally gassed as it was last week.

2. Communication finally gets figured out.

So much change and chaos for this defense the first month-plus of the season. It’s not getting much easier this week. Rotation at cornerback, Mike Hilton returns, a good thing, and I’m assuming the continued swap at RCB between Artie Burns and Coty Sensabaugh.

Linebacker is even messier with Keith Butler reportedly wanting to play all three ILBs to replace Vince Williams, which feels potentially disastrous, but that’ll be determined by communication and the gameplan. When will the Steelers be in base? Or nickel? Or whatever package Matthew Thomas they have planned for him.

Have to find that balance between playing to the units strengths but also not incorporating so much chaos that you beat yourself before the snap of the ball. A concept that has hurt this team too much already and at this point, is wholly unacceptable.

Double-moves have been effective against the Steelers’ corners. Joe Haden should’ve been beat for six in the second quarter last week. And Mike Hilton got beat twice by them in Week One against Cleveland. The Falcons run a relatively heavy amount of double-moves, even with rookies like Calvin Ridley. I expect Atlanta to see if the Steelers have corrected their mistakes. If not? Look out.

1. The defense plays too many single high looks.

Butler has gotten back to basics by playing a lot of old-school Cover 3 and single high looks. If it’s man coverage, that could work, though you’re holding your breath all game you can win those one-on-one matchups. But if it’s zone and this Steelers defense struggles to match #2 vertically? Gonna be a bad time. Have to be able to carry things vertically or else you’re putting the safety, likely Sean Davis, in conflict. And while Davis has looked competent, he’s not Earl Thomas or Ed Reed back there. Quarterbacks are comfortable throwing it down the hash.

As an aside, get Terrell Edmunds back in the box. Last week wasn’t a great plan asking him, who the team has banged the table for him as ONLY a strong safety, so much so that Hilton would play FS before Edmunds. Get him near the LOS, Davis in space, and life will be so much easier for this defense.

2. Butler fails to come up with an answer in dime.

And hey, maybe that answer is to not play dime at all. Or perhaps that’s where Thomas checks in. But there’s no Morgan Burnett. Backup safety Nat Berhe is on IR (he struggled in dime anyway). So who is the 6th DB this week? As an emergency against Baltimore, after Berhe went down, Sensabaugh and Burns were both inserted on the field. That could happen again (Sutton most often became the “dime” defender, floating around, in this case).

But I’m curious what the response will be. Does Brian Allen factor into anything this week? If he can find that answer, get an extra athlete on the field to get them off the field on 3rd down, they can at least slow down this Falcons’ offense.

3. They can’t establish a vertical threat.

There’s no doubt the offense is missing some of its oomph over the top. They had it in Sammie Coates and Martavis Bryant. Look at when the Steelers’ offense  really clicked in 2017. The final month of the season and the playoff game against an elite Jaguars’ defense, when Bryant got in gear and Pittsburgh could hit those big plays over the top.

James Washington hasn’t been that guy – yet – and this week is as good as any to start. But the source can come from anyone. It begins with Ben Roethlisberger, who has struggled with his accuracy and placement on his deep ball, but regardless of who is to blame, it’s gotta work. Want to win a shootout? Hit a couple chunk plays. Even the best offenses can’t go on 10 play excursions the entire game.