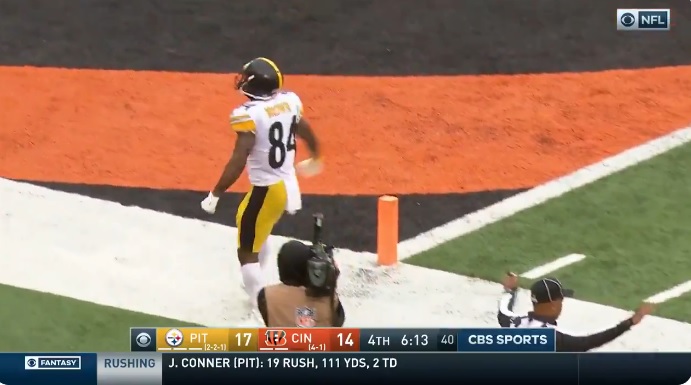 Your winners and losers from the Pittsburgh Steelers huge 28-21 win over the Cincinnati Bengals. What a game.

James Conner: Conner again provided a large chunk of the offense again today, offensive coordinator Randy Fichtner seeming to enter the game with a physical, heavy personnel type of matchup. Conner answered the call, as he’s done when given a puncher’s chance all season long. Like usual, he’s run tough, physical, and made Bengals’ defenders who dared step up to him pay. He continued to be an asset as a receiver and a blocker, including one fantastic 3rd down blitz pickup in the second half that allowed Pittsburgh to move the sticks.

Maurkice Pouncey: Pouncey was one reason why Conner found so much daylight. They repeatedly pulled him out into space, throwing key lead blocks for his back to run behind. Some in the national media seem to think Pouncey’s best days are behind him. But anyone who really watches Pouncey week-in, week-out, knows he’s still playing at a high level.

JuJu Smith-Schuster: Granted, it was a bumpy start for JuJu, who misjudged a vertical throw early in the game and a drop on third down a short time later. But despite his youth, the dude is still only 21 years old, he came up with some big plays. None more than the crazy contested grab he made to the half-yard line. The Steelers would find the end zone moments later. Great response and mental toughness, not getting suckered into all the storylines and drama that surrounded the week.

Vance McDonald: Despite a late game fumble that the Steelers recovered (another thank you to JuJu), McDonald couldn’t be brought down in open grass. At one point, he had more receiving yards than the rest of the team. Showing why the team have been so patient with him, letting him get healthy, and reaping the rewards on the field.

Defensive Line: They showed up today. Run defense was a little shaky, that’s a multi-layered issue, but the pass rush did a little more than previously. Javon Hargrave and Stephon Tuitt with sacks today. They still can – and need to – be better but they’re getting pressure and the OLBs simply aren’t.

Mike Hilton: Run defense, coverage, a ho-hum day for Hilton but a good one nonetheless. Love his attitude, fearlessness, and ball skills he shows in coverage.

Antonio Brown: When you need a big play, you call Antonio Brown. Great design on his game-winning touchdown to get Brown free on the slant. But he did the rest in a game where most of his big plays came off YAC. Bengals didn’t let him have anything over the top. He finished with 5 receptions for 105 yards and that oh-so important touchdown.

Kameron Canaday: Not very often a long snapper shows up here. Even rarer he shows up here without a bad snap. But Canaday was called for holding twice today, don’t ask me when the last time that happened to a Steelers’ LS, and to be honest, he’s been getting away with it for a couple weeks now.

Kick Coverage: Entering today, it’s been really strong. After today, it looks a lot worse. Two long returns given up to Alex Erickson, the former setting up the Bengals’ end-of-half score to tie the game. No one getting off blocks and Danny Smith didn’t seem to stunt and twist like he usually does.

Red Zone Offense: Praised it coming into this week and I guess I was the jinx. Started off hot, scoring on their first two trips, and then stalled out in the second half. Finished the day 2-4.

Anthony Chickillo: Chickillo is who he is and I can’t get too mad at him for it. On most teams, he’s not a #3. But he is in Pittsburgh and just feels woefully ineffective on nearly every rush. He did draw a holding call that negated a long catch by Tyler Boyd but that was it.

Artie Burns: It’s time to go with Coty Sensabaugh full-time. You just can’t trust Burns to play with proper technique. For the life of me, I have no idea what he was doing on Boyd’s touchdown at the end of the half. Backpedaling in the end zone, letting the receiver break his route with no contest. On the final drive, he was flagged for another dumb penalty, one he certainly didn’t need to commit.

Mike Tomlin: For two uh, interesting challenge decisions. His actual challenge on a 3rd down conversion he had no chance of winning and then opting against challenging Conner’s long run marked down at the one-yard line. Yes, you can make a fair argument for Tomlin having faith in his offense to punching it in the next three plays, and they should’ve had, but it probably wasn’t the right decision.