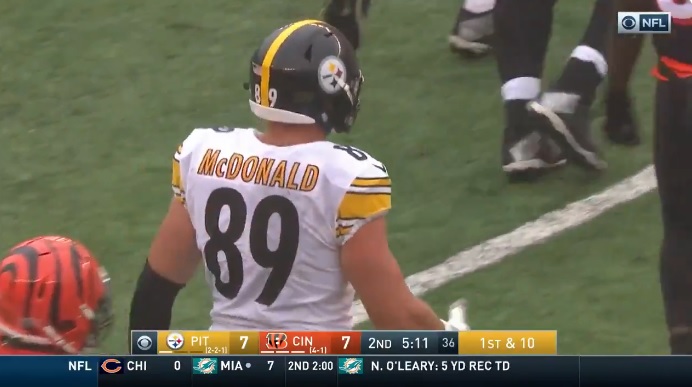 The Steelers found themselves in control for majority of the game but two second half red zone failures ended up leaving the Steelers down by one with just over a minute remaining. But as the team has been waiting for all season, it was the heroics of Antonio Brown and Ben Roethlisberger that saved the team from defeat as they defeated the Bengals 28-21.

Andy Dalton was sacked three times and threw for just 216 yards but a 75-yard drive gave the Bengals a late 21-20 lead with just a minute remaining. The outcome looked bleak but with 10 seconds remaining, Roethlisberger connected with Brown on a 31-yard touchdown to perhaps save the season. Brown would finish with five receptions for 105 yards.

Brown’s touchdown not only won the game but gave the Steelers new life on their season.

The Steelers looked to ride the services of running back James Conner early as after last week’s big game against the Falcons, Conner continued right where he left off against the Bengal’s defense. Conner finished with 111 yards rushing and two touchdowns.

Both touchdowns were plunges from the one-yard line, the first tying the game at seven and the second giving the Steelers a 14-7 lead with just over a minute left in the first half. But on both occasions, it was the Steelers’ special teams that allowed the Bengals to find the endzone.

Awful field position gave the Bengals their first two scores. A 36-yard punt by Jordan Berry led to a Dalton to Tyler Boyd two-yard touchdown pass. The score was fuelled by the Bengals converting three third down attempts and a dropped interception by Joe Haden. Boyd would find the endzone again before halftime, this time hailing in a 14-yard pass from Dalton to tie the game at 14.

With the game tied at 14, Conner looked to score what would have been his third touchdown of the day but officials ruled him down at the one. Mike Tomlin made a questionable call in not challenging as it seemed Conner had crossed the goal line. The non-challenge would cost the Steelers four points as the offense was unable to score from the one-yard line on three times and would end up settling for a field goal instead.

Vance McDonald continued to be Roethlisberger’s favorite target, nabbing 7 receptions for 68 yards. McDonald battered and bruised the Bengals defense all afternoon and with majority of the attention going towards Brown, the tight end was able to make the most of his opportunities.

Roethlisberger was 32/46 for 369 yards with one touchdown and no interceptions, his touchdown being his biggest of the season.

The Steelers will now head into their bye week and enjoy an extra week of preparation and rest. They will then take on the second half of their season as they return to Pittsburgh and take on the Cleveland Browns on October 28th at 1 pm EST.