With Week 7 of the 2018 NFL regular season set to get underway tonight I figured today would be a perfect time to review the ANY/A stats of all 32 teams in addition to looking back at what recent history says about these numbers.

In case you’re new to the ANY/A stat, it is an advanced statistic in football that quantifies the contributions of a quarterbacks passing game by including five key passing statistics; passing yards, passing touchdowns, interceptions thrown, times sacked and sack yards lost. This stat can be calculated for both offenses and defenses and of course rewards for touchdowns, passing yards and sacks. It’s calculated as follows: ANY/A = (pass yards + 20*(pass TD) – 45*(interceptions thrown) – sack yards) / (passing attempts + sacks).

When calculating the ANY/A for the offenses and defenses of every team, you can then easily come up with a differential of the two stats. Obviously, the better the positive differential is the better that team likely is compared to others.

Below are the offensive and defensive ANY/A stats from all 32 NFL teams after six weeks of the 2018 NFL season and they are sorted via best to worst differential. Obviously, some teams haven’t played six games yet due to bye weeks so that needs to be pointed out. However, generally we have a good idea about who teams are and aren’t offensively and defensively through five games played.

As you can see, five teams, the Los Angeles Chargers, Los Angeles Rams, Kansas City Chiefs, Seattle Seahawks and Baltimore Ravens, all have ANY/A differentials over 2.0 entering Week 7 of the regular season. Dating back to 2008 there have been 49 NFL teams that have registered differentials of 2.0 or greater through the first 6 weeks of a regular season and 30 (61%) of those teams went on to make the playoffs. However, only five (16.7%) of those 30 became Super Bowl Champions that season. 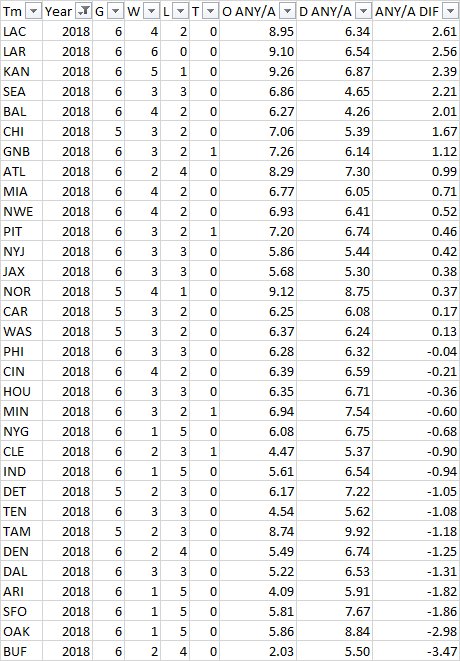 So how do the Steelers ANY/A stats through 6 regular seasons games match up to their previous seasons? 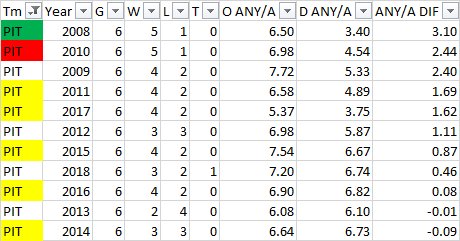 Can we draw any hard conclusions about the 2018 Steelers based on history of the ANY/A stat through six weeks of any one season dating back to 2008? Well, probably not hard conclusions, but based on history of the ANY/A stat dating back to 2008, the chances of the Steelers winning the Super Bowl this season aren’t great right now and especially due to the play of their defense.

Below is a chart that shows the ANY/A stats of the teams that have made the Super Bowl dating back to 2008 and once again, green signifies that team won it all in that particular season. While six teams have managed to make it to the Super Bowl since 2008 with a defensive ANY/A of 6.74 or greater after six regular season games played, all of them ultimately lost the big game. By the way, the 2017 New England Patriots were the last team to add their name to that list. 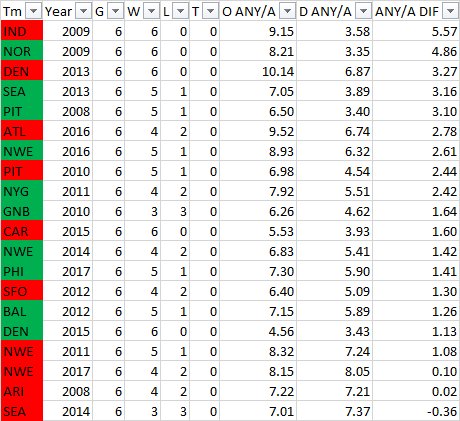 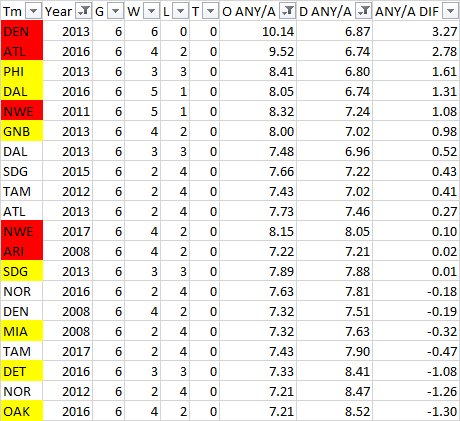 In summation, the Steelers need to fix their pass defense and they need to fix it in a hurry and I think the historical ANY/A data I show you after Week 8 will certainly back that statement up. The Steelers next two games are against the Cleveland Browns and the Ravens and they’ve already failed to beat both teams this season in earlier meetings. Obviously, if the Steelers lose both of those games it will certainly be even harder to predict them winning the Super Bowl this season. However, should Pittsburgh win both of those AFC North games and do so with a much-improved pass defense, it will certainly improve the team’s chances of winning it all this season and the post Week 8 ANY/A stats should back that up.