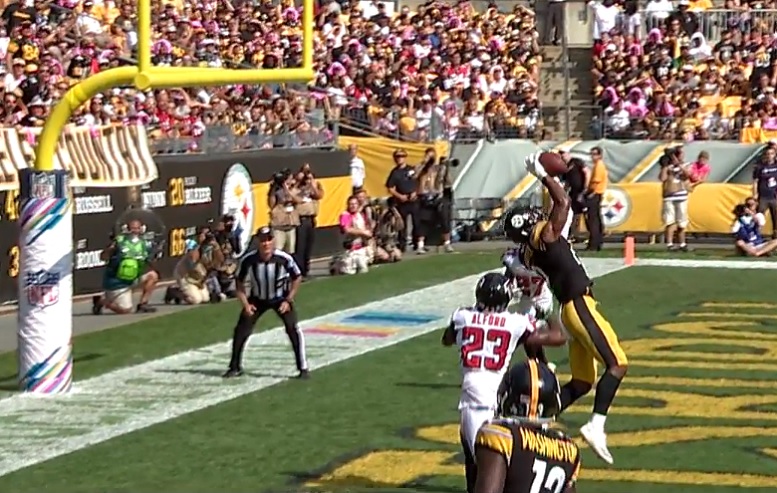 For the third time this season, the Pittsburgh Steelers eclipsed 30 points scored, laying 41 points on the Atlanta Falcons at Heinz Field. Dating back to last post season, the Steelers have now surpassed 30 points in three of their last four home games. A large reason why the team has been able to put up big point totals so effortlessly at times is due to their playmaking depth.

Last season it was Antonio Brown, Le’Veon Bell, Martavis Bryant and JuJu Smith-Schuster who were the focal targets for Ben Roethlisberger. While the Steelers have moved on from Bryant and are currently missing Bell, the offense has simply plugged other talent into their roles. Replacing Bell is running back James Conner, who has been Bell and more as a pass catching option for Roethlisberger and replacing Bryant has been the emergence of big play tight ends Vance McDonald and Jesse James. Through five games, here is how the Steelers play-makers rank in receiving yards:

The Steelers are in rare territory as they feature five pass catchers who have 200 receiving yards or more. They are one of only two teams in the NFL to have five players with over 200 receiving yards, the other team being Bryant’s new team, the Oakland Raiders.

Head coach Mike Tomlin has preached for years about the ‘next man up’ mentality and the Steelers’ offense has lived out his philosophy. Conner has perhaps been the best example of this, almost doubling Bell’s totals in the receiving game thus far. Through five games, Conner has 22 receptions for 239 yards, averaging 10.9 yards per reception. Through five games last season, Bell recorded 27 receptions for just 144 receiving yards, averaging 5.3 yards per receptions. Conner has also been an unexpected surprise in pass protection and has thus become a reliable three down back for the Steelers.

Meanwhile, James and McDonald have become quite the double tight end option for Roethlisberger and his offense. While, the two have just now started sharing the field together due to McDonald’s early injury woes, James has done an admirable job filling in as a starter and now settling in to a complimentary role.

The tight ends have become more than just Roethlisberger’s security blanket, a role made famous by former Steelers’ tight end Heath Miller as the duo have become big play options. James is averaging an absurd 20.7 yards per reception while McDonald is not far behind at 15.8 yards per catch. James’ 20.7 yards per catch currently leads all tight ends with at least 10 receptions and his six catches of 20 yards or more has been an explosive boost to the Steelers’ offense early this season.

The Steelers ability to spread the wealth has been crucial to the team’s survival as they look to overcome their mediocre start and inconsistent defense. This was especially important with Roethlisberger’s inability to connect with Brown that plagued the first quarter of the season. But now Brown has just enjoyed his first 100-yard game of the year as well, and with Brown now hopefully back into the equation as well, there is no telling where the limit is for this Steelers’ offense.

Perhaps more results like Sunday’s 41 point showing against the Falcons will not become a goal but rather a benchmark for the team. And with a handful of reliable playmakers, it certainly is possible.