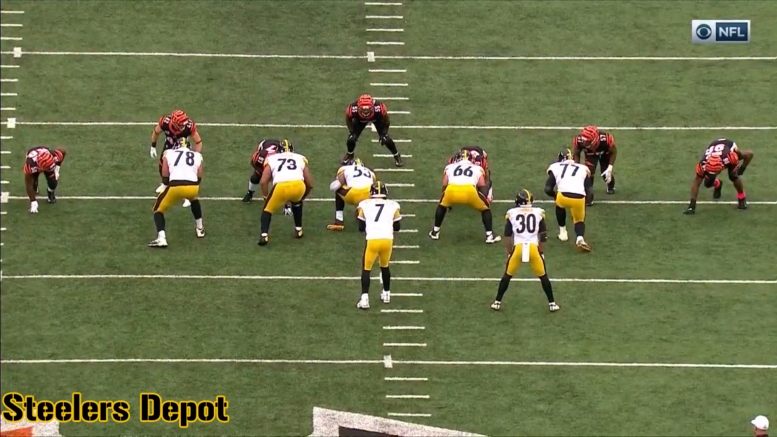 Pittsburgh Steelers quarterback Ben Roethlisberger has spent his entire career praising his offensive line. They are frequently among his very best friends on the team, whether it is Max Starks or Willie Colon or Maurkice Pouncey. Earlier in his career, he defended them to a fault, but these days he very well may be right when he says that the team goes as far as the offensive line will take them.

Arguably the most talented group of offensive linemen the Steelers have ever assembled, Alejandro Villanueva, Ramon Foster, Pouncey, David DeCastro, and Marcus Gilbert are all playing at a high level right now heading into the bye week, which was not necessarily the case earlier in the season. They appear to be hitting a stride that will hopefully carry into the second half of the year.

And they are starting to get noticed—again. After having been named the offensive line of the week, Pro Football Focus also acknowledged the units recent surge. A week after being ranked 13th in the league, the Steelers’ line moved up to seventh in the site’s rankings for the first six weeks of the season.

Writes Mike Renner, “the Steelers are fresh off by far their most impressive offensive line performance of the season. Going up against a talented Cincinnati front, they allowed all of 10 pressures on 46 dropbacks. Center Maurkice Pouncey has been their lowest-graded starter so far at 61.5 overall, and that’s in large part due to one rough game against Cleveland Week 1”.

In case you were wondering, he was graded at 75.2 for last week’s game. His second-highest grade was back in Week Three against the Tampa Bay Buccaneers in which he received a grade of 73.3. He graded under 50 in the season opener against the Cleveland Browns.

I suppose that is how things change after you go two straight weeks blocking for a 100-yard runner without giving up any sacks. Renner wrote last week of B.J. Finney and how he was actually the team’s highest-graded lineman up to that point.

“B.J. Finney has played 153 snaps filling in for David DeCastro at right guard and has been superb in pass protection on them. He’s allowed three combined hurries and owns a 90.0 pass-block grade. That bodes well for the future of this offensive line”.

The Steelers’ offensive line has had a history of getting off to slow starts even while becoming among the very best groups by the end of the season. Hopefully their slow start is already out of their system, and they can forge ahead over the final 10 games.

Of course that slow start was accompanied by injury. David DeCastro missed two games after suffering a fracture in his hand in the season opener. Gilbert also missed a game due to a hamstring injury, and Matt Feiler started in his place.