In simple terms, the easiest way to win the Super Bowl is to have the best set of players in the National Football League. If Team A has better players than Team B, then Team A will likely win right? While it seems that simple, football is not a simple game and winning is more than just about having the best players. Sometimes paying and retaining the best players leaves a team vulnerable and unbalanced in other positions as they have too many resources tied up in one pot. Ultimately, the game of football comes down to value, the team that wins is usually the team that is getting the most value out of its players.

The Pittsburgh Steelers have been getting extraordinary value out of two key players in the early portions of the 2018 season. Those two players are running back James Conner and wide receiver JuJu Smith-Schuster. Both Conner and Smith-Schuster were drafted in the early rounds of the 2017 NFL Draft, and just one season removed from their rookie year, both players are paying dividends to the Steelers’ 2018 campaign. It is easy to say that the value the Steelers are getting out of the sophomore duo has been a large reason why the team is still afloat at 3-2-1.

Below is a table of the NFL’s yards from scrimmage leaders up until week seven and you will see both Conner and Smith-Schuster on the list. Pay attention to what percentage of the Steelers’ overall salary cap they are each consuming. The Steelers have been extracting more production out of Conner and Smith-Schuster than imagined while barely making a dent in their 2018 salary cap, thanks to both players being on their rookie contracts. 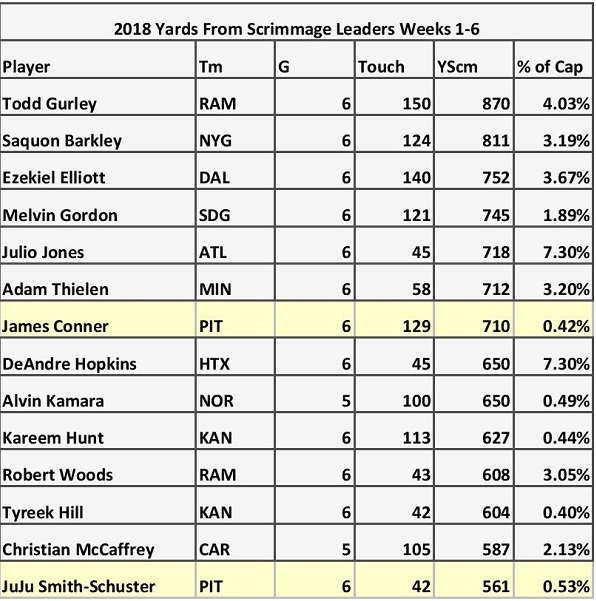 But wait there’s more, a closer look at Smith-Schuster shows that he has been one of the NFL’s best value picks since breaking onto the scene last season. 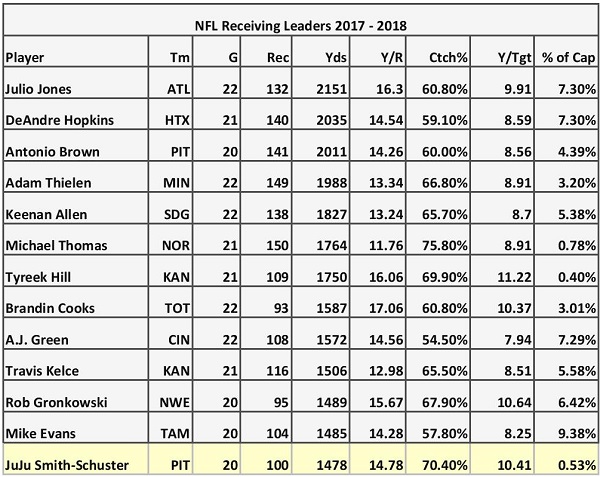 Since his 2017 rookie season, Smith-Schuster has recorded the 13th most receiving yards in the NFL, along with the third highest yards per target and second highest catch percentage. He has done this while carrying the second smallest cap hit out of the listed receivers above. Looking for even more incredible value, well the Steelers have gotten number one receiver production out of both Smith-Schuster and Antonio Brown for a fraction of the cost. Together the two combined for just 4.92% of the Steelers’ 2018 cap, which is way below the likes of Julio Jones, DeAndre Hopkins and other top receivers. Essentially the Steelers are getting two number one receivers for the price of one.

Getting incredible value of out a few rookie contracts is a formula that has been used by many prior Super Bowl champions but for the 2018 Steelers, it is just a bit more significant. That is because the Steelers are handcuffed by a few roadblocks in their salary cap management. The team is paying injured linebacker Ryan Shazier $8,718,000 million and Mike Mitchell $3,135,418 million after cutting him last off-season. That is $11,853,418 million for two players who are not playing. The Steelers also had to account for Le’Veon Bell’s $14,544,000 franchise tag and while $855,000 has bled back into the salary cap each week, there is not much the team can invest this money into this season. This money will likely roll over into next season where it can be better utilized.

With an abundance of money tied up in handful of inactive players, the Steelers were hard pressed to find value. Luckily for them, they have hit the jackpot on Conner and Smith-Schuster.

(Some data used in this article sourced from overthecap.com)