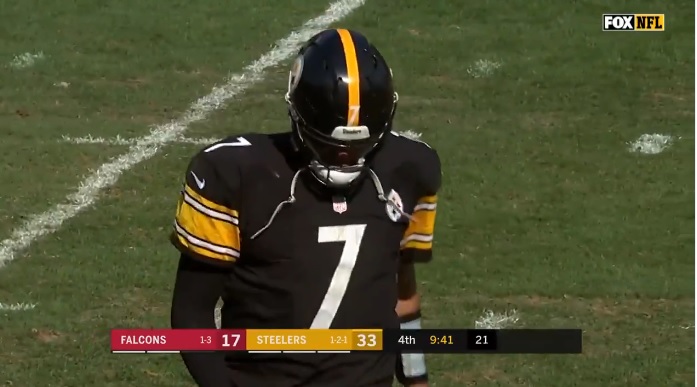 What many expected to be a shootout turned into the complete opposite as the Steelers connected on all three phases – offense, defense and special teams to take the flight out of the Falcons. With numerous stars missing on the Falcons’ defense, the Steelers reconnected the Wi-Fi between Ben Roethlisberger and Antonio Brown, soaring to a 41-17 victory.

After being limited to just one reception for three yards in the first half, it looked like the connection between Brown and Roethlisberger was off to another poor start. But a halftime power surge re-connected the duo like old times as the receiver and quarterback finished with two touchdowns between them.

The first came early in third quarter with the Steelers up 13-10, as Roethlisberger found Brown in the corner of the endzone to put the team up by ten. The second touchdown was even better, as they finally linked up on a deep pass. The 47-yard touchdown pass with just under 10 minutes remaining, gave the Steelers a 34-17 lead and resulted in Brown’s first 100-yard receiving game of the season.

Brown and Roethlisberger may have to thank running back James Conner as the medium for their reconnection, as his re-emergence gave the Steelers’ offense more room to operate.

Conner finished with 110 rushing yards and 75 receiving yards, as he would channel his early season form into action today. The running back got to work early as he totalled 72 yards from scrimmage on the game’s first drive. A run of 30-yards and a run and catch of 29-yards helped set up a one-yard touchdown plunge which put the Steelers ahead 6-0.

Continuing to ride the wheel of Conner, Roethlisberger hit JuJu Smith-Schuster on an 18-yard touchdown pass on the next drive to put the Steelers up 13-0.

The Falcons creeped back into the game as Matt Ryan hit Mohammed Sanu up the seam for a 43-yard touchdown pass to put the Falcons on the board. Like it has been documented all season, the middle of the field has been a struggle for the Steelers defense and Sanu made sure to make them pay again. An errant Roethlisberger interception in the red zone closed out the first half and left valuable points to be desired but the Steelers would answer big in the second half.

The defense was all over Ryan all game, never allowing him to get comfortable in the pocket or develop any sort of rhythm. T.J. Watt recorded three sacks, Jon Bostic and Cameron Heyward got another and L.J. Fort got one more. Filling in for the injured Vince Williams, Fort not only got after the quarterback, contributed in pass defense but he also recovered a strip sack for a touchdown late. In his first big showing, Fort proved he is someone to be relied on.

Special teams came through next as Roosevelt Nix came bursting through to block the Falcon’s punt. It would be Conner who punched it in once again, this time from two yards out to give the Steelers a commanding 27-10 lead heading into the fourth quarter.

The Steelers defense would hold the Falcons to under 70 yards rushing and while Ryan passed for 285 yards, he failed to make the most of his throws. Julio Jones was also a non-factor, as the secondary held Jones to 62 yards receiving.

The biggest improvement for Tomlin’s team came on third down as after a horrendous showing last weekend, the team converted 9/12 of their third down attempts, allowing them to move the chains and continuously march into the endzone.

The Steelers will travel to Ohio next weekend to take on the Cincinnati Bengals. With serious ground to make up in the AFC North, next weekend’s game will be extremely significant. Kick off is set for 1 pm EST.