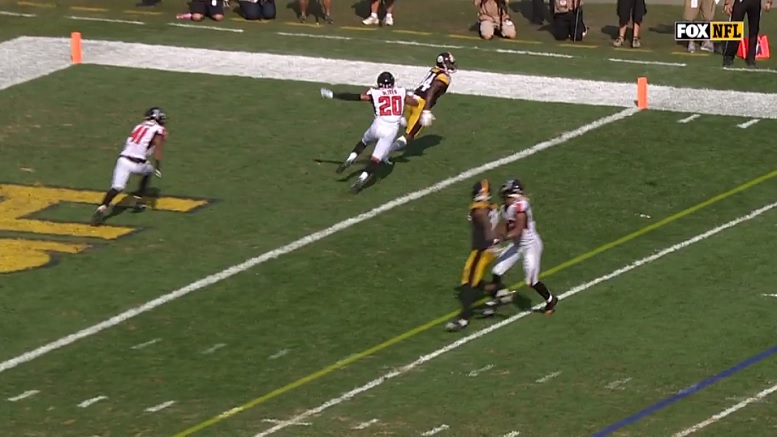 Pittsburgh Steelers quarterback Ben Roethlisberger had a solid second half in the team’s Sunday afternoon home win over the Atlanta Falcons and it included him completing 10 of his 12 pass attempts for 155 yards and two touchdowns. Both of those two touchdown passes went to wide receiver Antonio Brown and the quarterback sort of explained both of them during his Tuesday morning interview on 93.7 The Fan.

“That kind of play, it came off of a play we ran like maybe a play or two before,” Roethlisberger explained about his first of two touchdown passes in the second half to Brown, a 9-yard pitch and catch to the front corner of the end zone. “I saw something in the defense, so I kind of changed the play for A.B. to run that route. It’s a really hard route to run – throw – and just the whole combination of it.”

I pulled the all-22 of not only the touchdown play, but the one the Steelers offense ran two plays earlier that Roethlisberger referenced so that you can see them at the same time. You’ll notice the Falcons ran the same kind of single-high safety, man coverage on both plays. After running a sort of slot back shoulder fade the first time, Brown ran more of a post-corner the touchdown play complete with a nice head nod to the inside.

This just goes to show how simple it is to make in-game adjustments and just a few plays apart at that. Roethlisberger probably knew he would get that same defensive look and coverage by using that same formation of the play run two plays earlier. He knew all Brown needed was a little bit of extra separation in order to beat his man to the outside.

The second Roethlisberger to Brown touchdown came in the fourth quarter and on a 1st and 10 play from the Falcons 47-yard-line. Roethlisberger explained Tuesday during his radio interview what he told Brown after connecting on that deep pass touchdown to him.

“We had a play call where A.B. was just going to run and I told him after, I said, ‘A.B., when you just run and you’re not messing around with the defender and trying to get different kind of leverage, when you just run, there’s one place I can throw the ball and that’s over the top. When you’re messing with them sometimes and you’re not looking back, I’m not sure if I should back shoulder, or throw it over the top, or what.’ I said, ‘You just ran on that one, bud, and you gave me an awesome opportunity to throw it out there for you and it connected.'”

There isn’t really much to break down on that long touchdown pass from Roethlisberger to Brown. It’s single-high safety coverage once again and the return motion presnap let Roethlisberger know what he probably already knew and that’s that it was man-coverage with likely no blitz.

Remember, this was a 1st and 10 play with the Steelers leading 27-17 at the time and having already run for well over 100 yards in the game. Roethlisberger was also under center for this play with running back Stevan Ridley in the game in place of fellow running back James Conner. Being under center makes for an easy play-action fake for Roethlisberger before finally attempting to throw the football in the proverbial bucket to a streaking Brown.

As you can see in the slowed down gif below, Brown does a great job on his outside release and he used his hand and arm very well in order to get instant separation and thus on top of his defender very quickly. Alex Kozora already detailed this more in a previous post in case you missed it. From that point, it’s just a question of whether or not Roethlisberger could drop the football into Brown’s hands before the safety can get over to break up the pass. Spoiler alert, he did.