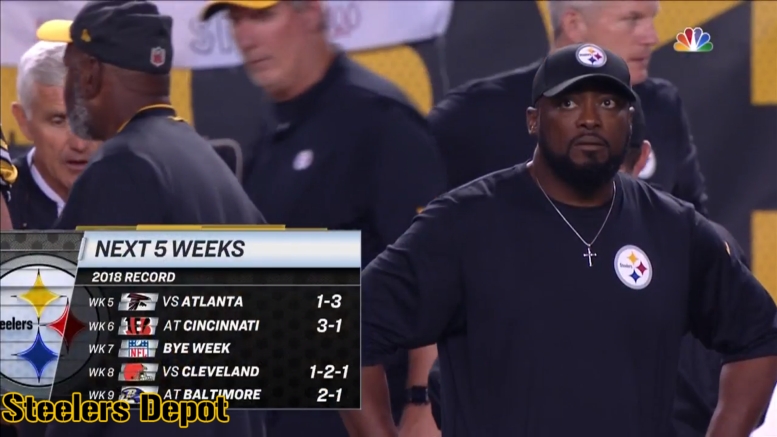 The Pittsburgh Steelers enter Week Seven with a game off, and the only team in the AFC North with an actual winning streak—meaning, stringing together more than one victory. Winners of their last two, they just defeated the Cincinnati Bengals, while the Cleveland Browns are coming off a loss. The Baltimore Ravens lost two weeks ago.

Despite the fact that the Steelers are idle at the moment, they could come out of tomorrow’s games with the best record in the AFC North, and thus the division lead, as well. And it’s a more realistic scenario than you might think at first, with both the Ravens and Bengals playing at least relatively well at 4-2.

The Bengals in particular have a tall task ahead of them, as they will be traveling to Kansas City to face the Chiefs, who are off to a 5-1 start to the Patrick Mahomes era, only just recently being handed their first loss to the New England Patriots in what was one of the most explosive games all season.

Meanwhile, they will be forging ahead in this game without starting linebacker Nick Vigil and nickel cornerback Darqueze Dennard, both of whom were injured against the Steelers last week. Starting safety Shawn Williams may or may not play. He suffered a concussion against Pittsburgh, but he was able to practice fully on Friday. Also ruled out are Tyler Kroft, whose season may be over, and Giovani Bernard.

The Ravens do get to play at home, but they will be tested by the most explosive offense in the NFL, hosting the 4-1 New Orleans Saints with a motivated Drew Brees who has history on his plate. The most prolific quarterback in NFL history is sitting on 499 career passing touchdowns. Baltimore is also the only team in the entire NFL that he hasn’t beaten, and he likely won’t face them again until 2022. They will want this game even more than usual.

That is how fast a season can change. Two weeks ago, the Steelers were 1-2-1 and many fans were already prepared to give up the season, ready to tank for some unknown college player. Fast forward and the Steelers may realistically find themselves in position to control their division after winning two games and having their top rivals lose two of three.

Of course, Brees and Mahomes will have to do their part to help make that happen.