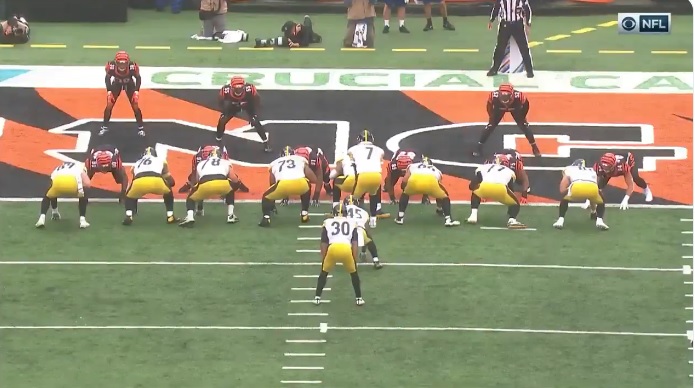 Weird, wacky game. But a good one in the end. Let’s try to get equally weird.

Last Steeler to accomplish that in back-to-back weeks? Jerome Bettis on November 3rd and 10th in 1996.

– With 46 attempts today, Ben Roethlisberger is on pace for 696 this season. That would shatter his career high of 608, set in 2014, and be second in NFL history, trailing only Matthew Stafford’s 727.

– This is the first such “walk off” TD for Pittsburgh since at least 1994, as far back the data goes. A 30+ yard score with less than 30 seconds left, trailing, to win the game. Mike Wallace did catch a final play TD against Green Bay years ago, though. But that was 19 yards out.

– Xavier Grimble’s 35 yards receiving are the most he’s had in a game since his final year at USC, November 23rd 2013. That’s nearly five years ago. He put up 46 in a win over Colorado.

– Roethliberger caught the second pass of his career. He caught a pass for -7 yards back in 2008. Today’s ricochet went for a loss of just one.

– Javon Hargrave’s three sacks this season is the most by a Steelers’ nose tackle since Joel Steed had that many in 1999. Casey Hampton’s career high was 2.5.

– Roethlisberger has been sacked just once over the last three games, 122 pass attempts. It’s the second best stretch of his career, only bested by his 123 attempts from Week 10-12 in 2013.

– Nine more penalties for the Steelers today, giving them 58 on the season. That’s a franchise record through six games, beating out the 57 they racked up in 2014.