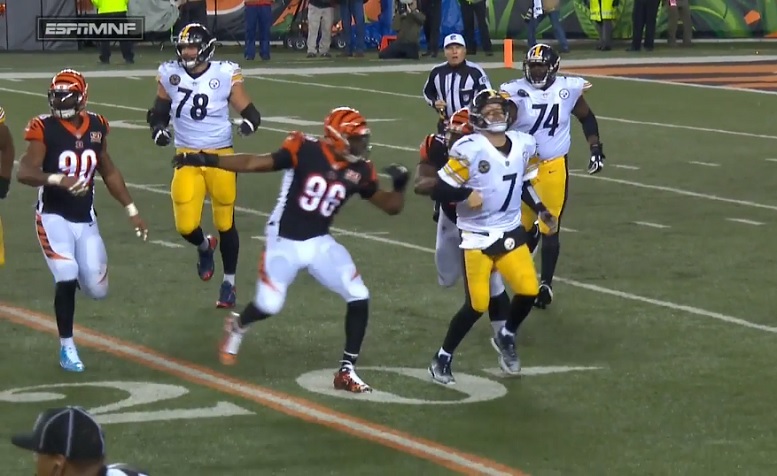 The Pittsburgh Steelers and Cincinnati Bengals have played quite a few memorable games over the course of the last several season and many of those have included several illegal hits and dirty play that resulted in numerous fines being handed out. On Wednesday, Steelers quarterback Ben Roethlisberger talked a little bit about the chippiness he’s observed over the course of the last several seasons when the Steelers have played the Bengals and expressed his hopes for a much cleaner game this coming Sunday in Cincinnati.

“You know what, it’s AFC, north football, it’s one of those games that can get chippy at times,” Roethlisberger said. “You hope it doesn’t, you hope it’s just a good, hard fought football game, but sometimes it gets a little chippy. So, we’ll just do our best to put all the past behind us and go play it like it’s a normal football game.”

Just last season in the second of two annual meetings between the two teams in Week 13 resulted in a player from each team being fined for actions in that game. Now former Bengals safety George Iloka was flagged and subsequently fined by the league for his  helmet-to-helmet contact on Steelers wide receiver Antonio Brown in the fourth quarter of that game. Additionally, Steelers wide receiver JuJu Smith-Schuster was flagged and ultimately suspended for one game for his fourth quarter blindside block on Bengals linebacker Vontaze Burfict.

In case you forgot, that game included 20 total penalties being accepted. Three of those penalties were for unnecessary roughness and two more were for grabbing the facemask. There was also one roughing the passer penalty called on Bengals defensive tackle Geno Atkins as well. Let’s also not forget that the two teams had players accumulate over $145,000 in fines stemming from a Dec. 13, 2015, game at Paul Brown Stadium in Cincinnati.

The Bengals now have Burfict back on the field again after he was forced to miss the first four games of the regular season due to a suspension and Roethlisberger was asked Wednesday if he’ll need to pay extra attention to where the Cincinnati linebacker is at on the field Sunday. Burfict, in case you forgot, is easily considered one of the dirtiest players currently in the NFL and he’s been fined numerous times for past indiscretions he’s had in games against the Steelers.

“Yes, because he’s a good football player,” Roethlisberger said. “Honestly, I’ve said this to him on the football field, he’s a phenomenal football player. Very smart and physical and can make all the plays and so you need to know where he is in that sense, yes, because of how good he is.”

So, how will Roethlisberger go about protecting himself on Sunday being as there could once again be some very questionable hits from the Bengals defense being involved in the contest?

If only it were that easy, right?

Here’s to hoping that Sunday’s game between the Steelers and Bengals is the cleanest one we’ve witnessed in years and more importantly, doesn’t include any players suffering a serious injury.