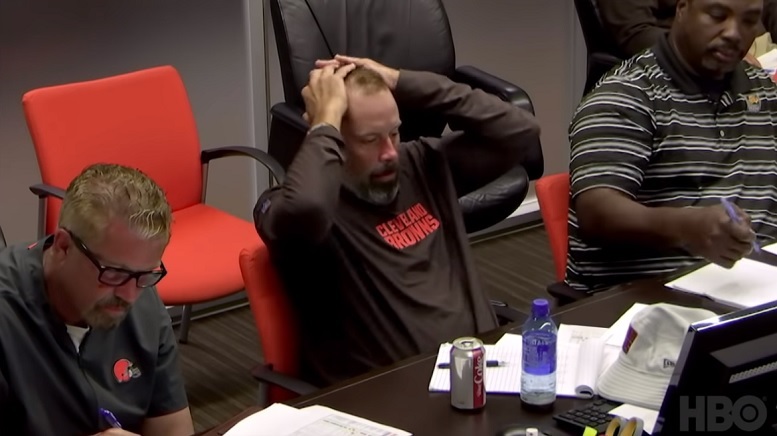 It seems clear that if the Cleveland Browns can’t quickly turn things around, there will be some major changes to the coaching staff. While it’s possible Hue Jackson is finally let go, NFL Network’s Ian Rapoport reports offensive coordinator Todd Haley could be getting his pink slip if Jackson wins the power struggle.

“For several weeks, it’s been clear that coach Hue Jackson and offensive coordinator Todd Haley have not been on the same page. Several people in the organization have battled to help them work together, but it has not improved.

If this continues, and the disconnect is not reconciled, a move will likely be made.”

A combative Haley is nothing new for Steelers’ fans. It was well-known the Steelers dumped him before this year not because of the on-field product, which was pretty good, but tensions off the field, including his relationship with Ben Roethlisberger and the rest of the coaching staff.

Haley and Jackson’s disagreements were on display during Hard Knocks and have spilled over into the regular season. Jackson made headlines last week, remarking he may get more involved in the offense, though he attempted to walk those comments back after criticism mounted.

The Browns’ offense has been a little underwhelming this year despite the talented Baker Mayfield at quarterback, trading for Jarvis Landry, and drafting Nick Chubb. The offense has gone into the tank over the last three weeks. Cleveland has lost all those games and fallen back into the AFC North basement.

Life doesn’t get any easier for the Browns over the next three weeks. They’ll play Pittsburgh today, then host Kansas City and Atlanta before seeing their bye week. Going 0-3 over that span is entirely possible, if not likely, and if they drop each of those, you have to think a change – somewhere – will be made.

Haley said today will be his first game visiting Heinz Field. If things break the wrong way for him, it could also be his last as a Brown.