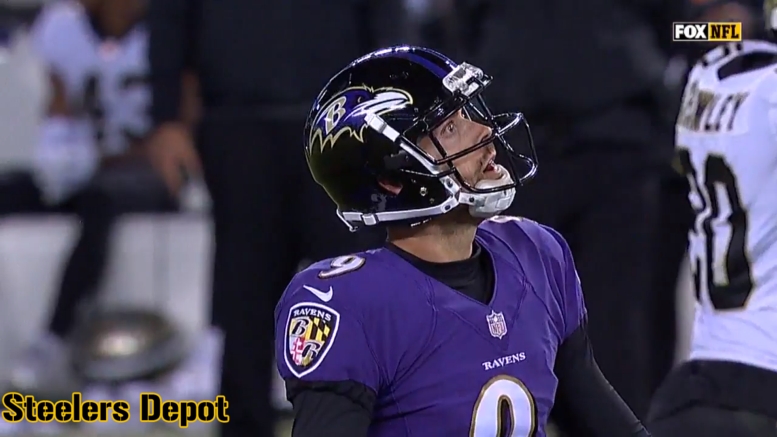 If you were tasked with coming up with a list of all the ways that the Baltimore Ravens can realistically be expected to lose a game, the manner in which they met defeat yesterday evening would probably come out pretty far down the list.

Their Pro Bowl kicker, Justin Tucker, pretty much indisputably the best kicker in the game today and quickly establishing himself as one of the greatest of all time, had the opportunity with under 30 seconds to play to convert a simple, routine extra point in order to tie the game at 24-24 against the New Orleans Saints.

He hooked it right.

That’s right, the Ravens lost a game because Justin Tucker missed an extra point in the final 30 seconds of the game. Drew Brees got the ball back and took a knee to end the game, getting that final notch on his belt, as Baltimore was the last franchise in the NFL that he had never defeated before.

Earlier in the game, of course, he also threw his 500th career touchdown pass, becoming just the fourth player to do that in NFL history, joining Peyton Manning, Brett Favre, and Tom Brady, who also accomplished the feat just recently. That pass went to Benjamin Watson, who spent time between stints in New Orleans with—of course—the Ravens.

But getting back to the matter at hand, the Ravens would have in all likelihood been sending the game into overtime had Tucker not hooked the extra point wide right. The Saints’ defense left wide receiver John Brown wide open in the right corner of the end zone for what should have been the stupefying game-tying touchdown, only to see itself out-stupefied by what followed.

As you might have heard, Tucker had never before missed an extra point in his entire career, and that’s including the postseason, and going back through college. In over 300 combined attempts, he had never, ever missed an extra point. Which is why he was completely stunned after missing his first ever in a meaningful game at such a big moment.

“I can’t tell you what happened, but at the end of the day, I feel like I cost us the game”, he told reporters after the game. “Every single one of my teammates has told me the opposite, and no one play wins or loses a game, but that’s a tough thing to grapple with when you’re the guy in that situation”.

Tucker added that he believed he did hit the ball the way he wanted, that it felt right coming off his foot. It actually looked initially liked it would be routine before it radically hung a right. It was in fact a windy day, and several kicks were a bit shaky.

“I’ll let this hurt for another couple hours, and then I’ll do everything I can to move on”, he added. “Nothing will change for me, I’ll tell you that”.