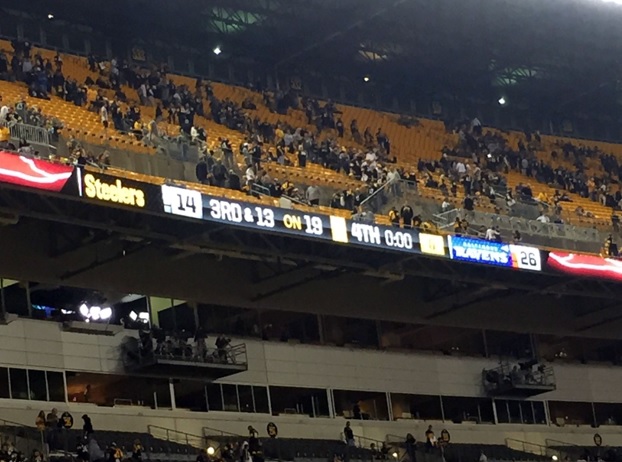 Mike Tomlin’s comment from his postgame interview was about all you could say about the Pittsburgh Steelers pathetic performance.

The defense has taken the brunt of the complaining up until now. However, they did their job several times and the offense did not deliver.

All yinz think defense is the problem. I’m telling Gus it’s the offense not doing their job to get a lead. @Steelersdepot

Pittsburgh started in a hole with the Baltimore Ravens scoring a touchdown on their opening drive. The Steelers offense outdid themselves on their first drive. Instead of a three and out, Vance McDonald fumbled the ball away. The fans were booing 6:15 into the game. Baltimore taking an early 14-0 lead.

McDonald made some nice catches and got fans back into the game. Unfortunately, two drives ended with threes instead of touchdowns. Ben Roethlisberger did not seem to be meshing with Antonio Brown. Brown got open, but Ben’s passes were not catchable. The duo finally connected for a touchdown near the end of the half. James Conner converted the two pointer to tie the game at 14.

The Steelers offense received the opening kickoff to open the second half. But, they ended up punting instead of taking the lead. Two more times the Steelers got the ball with an opportunity for Ben to direct a score to take the lead and failed. The end of the game was putrid. A sack with 2nd and short turns into 3rd and 11. An ugly interception and the fans were streaming out of the stadium.

The defense was a sieve. Although, they made three important stands. The first was in the first half with Pittsburgh down 14-3. Baltimore was about to score to make it a 21-3 game. A turnover prevented the score which caused a ten-point swing when the Steelers scored their second field goal.

In the second half, they held Baltimore to a field goal after a Pittsburgh three and out to open the half. They did it again when Pittsburgh’s offense did not score any points. Another opportunity the defense gave the offense to take the lead.

Joe Haden had some spectacular pass defenses. Bud Dupree’s sack had people fired up. Artie Burns & Coty Senasabaugh swapped places a few times with no discernible difference. They could have worn the same number. John Brown ran by Pittsburgh’s secondary like they were wearing ankle weights. Luckily his 71-yard reception went for naught when Sean Davis stripped the ball and Terrell Edmunds recovered it.

Last week my description of the defense ended with “I’d like to see this same pressure on Joe Flacco Sunday night.” Yes, Dupree & Javon Hargrave sacked Flacco but he was unpressured for most of the game. Cam Heyward and Stephon Tuitt are officially lost at sea. I checked the inactive list but did not see them there. Where are they?

Chris Boswell made both his field goal attempts and did not have to try an extra point. Fans are relieved by a performance that just a few weeks ago would be taken for granted. Jordan Berry only had one of his five punts downed behind the 20-yard line. On the plus side, the Ravens returned one punt for 4 yards. The problem is he is not reversing field position like Sam Koch did tonight. Special teams did clean up their penalties but Darrius Heyward-Bey was hurt early. Matthew Thomas was a gunner on punts after that. Ryan Switzer had a nice kick return to open second half. Too bad the offense could not exploit it.

Steelers Nation has reason to worry. The NFL’s point of emphasis on protecting quarterbacks and rules favoring the offense lets teams score like pinball games. There are no dominate defenses in the league. Virtually all teams have been torched this year. Though, it seems like Pittsburgh’s defense is more porous than most.

Tonight, it is my opinion that the defense put Pittsburgh in position to win this game. The offense, Ben’s passing in particular, was putrid. Again, another game where the offense starts with three and outs or worse. Could Ben have a sore arm or elbow we are unaware of?

A weak defense coupled with an ineffectual offense in key moments is what the Pittsburgh Steelers are right now.

Here is what I gleaned from the Steelers Depot Live Update and Discussion Threads:

The “best” of the 1,294 comments in the 1st Half thread was led early in the game by Michael Cunningham with “a healthy V Mac (Vance McDonald) could be the key to our whole season”  Shannon Stephenson observed after falling behind early, “Sad thing is I am not upset and expected it….hmmm.” Steeldog22 did find a bright spot in the first half: “Switzer is so solid. Really good pickup. Not worried about punt return at all anymore.”

1,219 comments in the 2nd Half Thread. Jaybird got the best comment with “Forget Renegade. Our song should be Communication Breakdown by Zeppelin.” Mr. KnowItAll summed up most of our feelings with, “Flat out embarrassing.”

In the 2018 Memorial Day Weekend: Steelers Friday Night Five Questions, I committed to play songs that Steelers Depot respondents had suggested might be the new Steelers anthem if Renegade by Styx was ever replaced. I’m postponing the next entry until next article. Instead, Jaybird gets the nod with Communication Breakdown by Led Zeppelin.