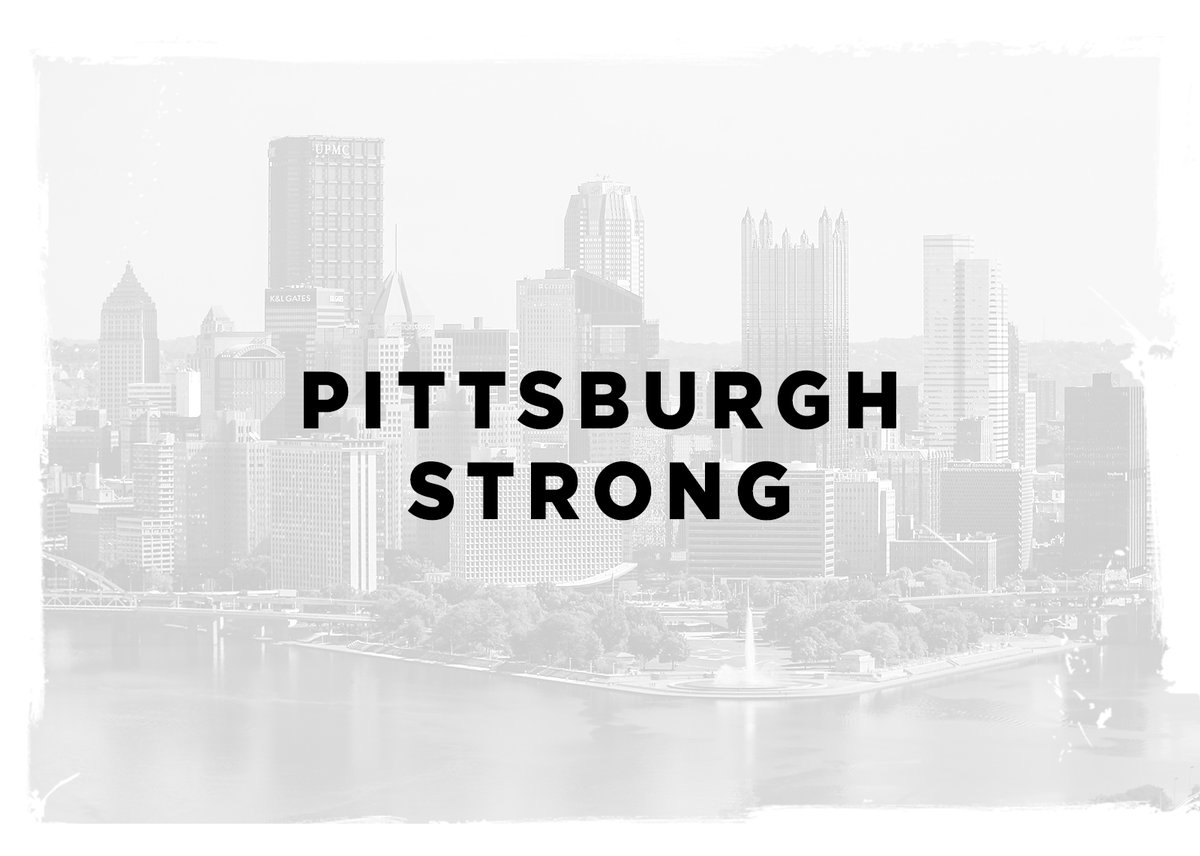 An incredibly difficult weekend for the city of Pittsburgh. Sunday’s Steelers game is long over but the tragic aftermath of a senseless attack that took eleven people from us, forever changed the lives of countless family and friends who held them dear. Just a moment to consider these eleven people:

Just a prayer or kind thoughts for the eleven plus the six who were wounded including responding police officers.

Pittsburgh once was identified by the billowing smokestacks from manufacturing steel and related industries. Now, sports teams identify Pittsburgh as much as anything. The three professional teams share the city’s Black & Gold colors. Cheering for the Steelers bring people together from the diverse population who make up the Pittsburgh metropolitan area and fans from all over the country. However, the shared pride in the Black & Gold does not erase the social problems and indeed, hate that a very few people direct at others for no other reason than having a different skin color, religion, ethnicity, sexual orientation, or some other difference.

Unfortunately, those very few misanthropes have a disproportionate impact on our lives. To function in a human society, people must accept the differences we all contribute to our neighborhood. To do otherwise is to allow ourselves to devolve into chaos. We can control our own actions and words. A friend that I have met through being a Steelers fan put it well in a tweet.

I don’t really know all of my Steelers’ friends on here. But know that I’m a person who love you all. If you are going to the game, try to escape life’s ups and downs. Together we stand stronger and better as one!!! 💛❤️💙

Mayor Bill Peduto also tweeted out the Pittsburgher’s Creed. James G. Connell Jr. wrote it sometime before his death in 1914. Connell was from Beaver County and died at age 33. Wise beyond his years; his words are worthy of consideration. The last few words of the creed:

I appreciate Steelers fans like Craig who arrived Saturday on a flight from New Jersey. He went straight from the airport donate blood. Something positive that he could do. All those individual acts help bind us together.

The Steelers offense starts out with a 3 and out. The second drive ends with Ben Roethlisberger’s pass intercepted. A third drive is another 3 and out. One quarter and not even a first down. Thankfully, the Cleveland Browns were only kicking field goals. The spark that was needed seemed to be the Browns missed field goal that would have made it a two-score game. Antonio Brown was inexplicably given room and he scampered into the endzone on a 43-yard passing play.

The Steelers then drove down the field with a masterful 16 play drive that went 87 yards and ate 7:12 off the clock to end the half in front of Cleveland 14-6. Mike Tomlin made a very gutsy call to go for it on 4th down after James Conner just missed picking up a 1st down. AB caught the ball and scored his second touchdown. James Conner held to just 33 yards on 10 carries but looks like receivers starting to get open.

The opening drive looked promising until Cleveland stripped Stevan Ridley of the ball. Pittsburgh’s offense showed resilience by responding to Cleveland’s core following recovery of the free kick after the safety. James Conner showed both power and some elusiveness to find the seams in the Brown’s defense. By the end of the game, Conner and the offensive line just wore out Cleveland’s defense. Conner gained over 110 yards on the ground in the 2nd half. Conner was also effective as a safety valve. Just going beyond the line of scrimmage and allowing Ben to loft a couple passes that gained yards and left the aggressive Browns defense turning on its heels to chase Conner down.

Another great game by the offensive line which gave up one sack while giving the running backs room to run.

The Steelers defense did not have many answers on the Cleveland’s first drive. They look tired and confused. Bud Dupree would later redeem himself with the safety but early in game he was in backfield and Nick Chubb eluded him for an eight-yard gain. The defense was again on its heels following Ben’s interception. The good news was that they held the browns to another field goal. Constant pressure on Baker Mayfield had him scrambling just to throw the ball away. Joe Haden intercepting the ball early in the second quarter set the tone. The defense played with confidence and began shutting down the running lanes. Mike Hilton really stood out to me.

The defense began asserting themselves on the Cleveland offensive line. Desmond Harrison grabbed Bud Dupree to prevent a hit on Mayfield in the end zone which gave the Steelers two more points. Following the turnover on the free kick, Cam Heyward was penalized for roughing the passer. It looked like he was pulling up and hit Mayfield in the chest with his forearms but the result put the Browns even closer to the goal line. Three more penalties following Pittsburgh defensive plays to keep them out finally resulted in a Brown’s touchdown.

Nevertheless, the defense was telling Cleveland that no scores were going to be given easily at this point. Holding Cleveland to just 12 points for most of the game was satisfying. Anthony Chickillo had some nice plays but will have to watch the game again to see who else exemplified themselves.

Jordan Berry had a beautiful punt that pinned the Brown’s deep and led to a safety. Jabrill Peppers did return two punts for thirteen yards apiece. I am not sure if it was hang time or coverage that was the problem. There were several penalties on the special teams. Chris Boswell made a 42-yard field goal which was satisfying.

The frustrating play was the free kick after the safety. Ryan Switzer admitted that he did not know the rules and there was some confusion on the play. Roosevelt Nix waved for a free catch but then stayed away, Switzer approached the ball but then allowed it to land as the Browns raced to recover the ball. I’d like to know what Danny Smith instructed the receiving unit on that play. This does not need practice, he just needed to remind them that it was a live ball.

Alex Kozora led off the “best” of the 659 comments in the 1st Half thread with “Here We Go!” PaeperCup thought the defense was shorthanded in the beginning of the game, “Our defense is Haden and Hilton.” After a frustrating first quarter, #7 saw how the offense as fixed: “Tomlin must have told AB to get open and for Ben to throw it to him.” The Intense Camel summarized how Steelers games go: “The Steelers fan experience:

700 comments in the 2nd Half Thread led by PaeperCup, “Good job defense!” Lambert58 explained, “The Defense playing better in the BLOCK numbers.” Steelers D believes that, “Our new rivalry with Browns is based on who is dumber, who blows more assignments and who is more poorly prepared.” After seeing Conner’s dominance in this game Intense Camel concludes, “Bell f**ked up.” A lot of commentary on Conner.

A slow start but he Steelers showed that they can be dangerous on both offense and defense. It was notable that once Coty Sensabaugh hurt his foot he was replaced by Cam Sutton and not Artie Burns. James Washington was also inactive for the first time this year. It will be interesting what changes Mike Tomlin makes to the line-up before going to Baltimore including Marcus Gilbert if he is available. A difficult venue to play, M&T Stadium will be loud. I just hope the Steelers puts on a show that silences the Ravens faithful to mere chirps.

In the 2018 Memorial Day Weekend: Steelers Friday Night Five Questions, I committed to play songs that Steelers Depot respondents suggested might be the new Steelers anthem if Renegade by Styx was ever replaced. Here is entry 27 of 45 from Jeremy: I Stand Alone by Jackyl.