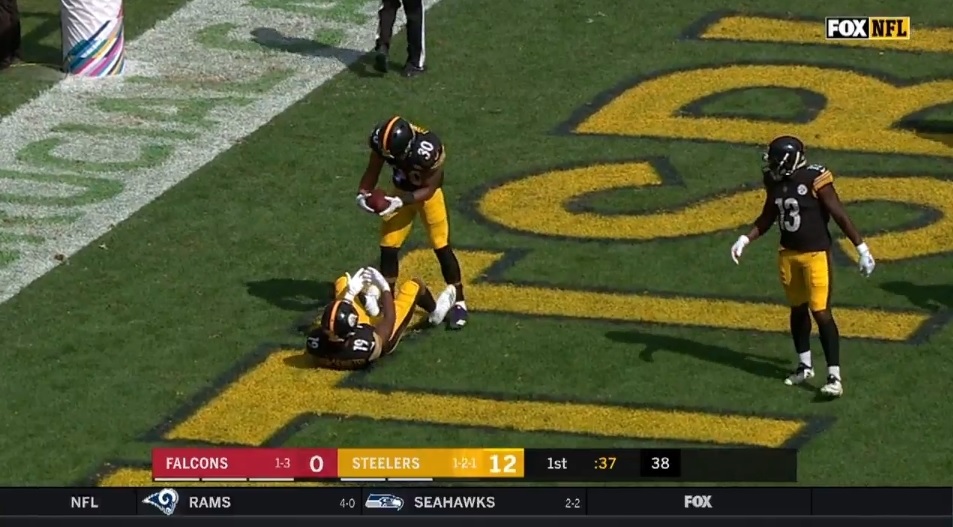 It is Monday evening. I delayed recording my impressions of the Pittsburgh Steelers to bask in their victory over the Atlanta Falcons. Everyone recognized that the outcome of this game was especially important. A few fans including pundits were already addressing this contest as a “must win” game just five games into the 2018 regular season.

I arrived in Pittsburgh late Friday evening after watching a college rugby match between my alma mater California University of PA at Saint Vincent College. Both coaches are alumni of Cal U, but my allegiance was with my old team. I accepted the Cal Vulcan’s 41-7 victory as a positive sign for the Steelers chances on Sunday. As an average Steelers fan, I seek any signs that show a favorable outcome for the Black & Gold. It is the fear of the unknown. Or, I may be trying to shape the outcome of events that are beyond my span of control. Such is the life of a fan.

Leading up to kickoff, Pittsburgh fans were a mix of optimism and pessimism. A lot of grumbling about the need to fire various members of the team’s staff up to and including Mike Tomlin and Kevin Colbert. Keith Butler’s name came up a lot. Opinions on the handling of Le’Veon Bell ranged varied. One extreme was pay the man his money, we need him now. The other was trade him or rescind his tag. Reality was not really a factor on these positions. Raw emotion trumped any sense of what was possible or in the best interests of the team’s success.

Similar variations dominated on what was ailing the team and the current players who were to play Sunday. A lot of folks predicted a shootout. Some feared that the offense would continue to sputter at key moments in the game. The fans coming into the stadium were hopeful but keeping a large dose of skepticism about the coaches, their schemes, and the players performance. How was this porous secondary going to handle Matt Ryan, Julio Jones, and Calvin Ridley? The prevailing mood was “show me.” Give me something to cheer about and you’ll hear me. But, give me something to boo about and you’ll hear me too. These are Pittsburgh Steelers fans.

The Steelers offense finally did what fans were expecting all season. They drove down the field and scored a touchdown after the opening kickoff. A big play on this opening drive was on their first 3rd down of the game. James Conner caught a short pass and gained 29 yards. Conner then capped the drive by scoring from one yard out. The fans were high-fiving and cheering all around. A smattering of boos when Chris Boswell missed the extra point, but the team had an early lead. Pittsburgh scored again on the next drive, but Ben Roethlisberger missed on passes to Antonio Brown which did get some more boo birds going. Heinz Field erupted in cheers when Ben connected with JuJu Smith-Schuster.

As the half was ending, Ben showed me he was here to win. The proof for me was not in a pass but an 8-yard scramble to get to the 7-yard line. Unfortunately, Ben being Ben he tried forcing the ball to AB twice. The second time AB must have had four Falcons defending and they intercepted Ben’s pass preventing a score to close the half.

In the second half, the offense continued its good works. They scored on their first drive after the defense forced Atlanta to punt. At the beginning of the 4th quarter Atlanta scored to come to within 10 points. Roethlisberger responded with his best pass of the season. Antonio Brown gained some leverage on two defenders and Ben laid the ball right into the basket for a 47-yard score.

At this point, fans were feeling it. The feeling of a Pittsburgh victory without having to bite their fingernails down to the final minute of a game. James Conner had a dominate performance. The offensive line opened holes for him and kept Ben on his feet and gave him plenty of time to find targets down the field – though his accuracy was off at times. It was nice to see the creative mixing of personnel. Atlanta looked confused when Pittsburgh came out with three tight ends and split them wide. It was also nice to see Stevan Ridley get some snaps to spell Conner on a sweltering day.

The defensive line penetrated the Atlanta backfield. The outside linebackers set the edge when needed. Mike Hilton’s blitzes are the real deal. L.J. Fort is fast. The defenders tackled receivers right after the catch. Matt Ryan voluntarily crumbled to the ground more than once. TJ Watt and others forcibly brought “Matty Ice” to the ground as the Steelers collected six sacks. Clearly, he was not comfortable in the pocket.

The coaching staff rotating the linemen & linebackers to keep them fresh in the heat. Terrell Edmunds and Sean Davis played all 72 defensive snaps with Joe Haden just behind with 71. Bud Dupree had the next highest number with 60 snaps played. L.J. Fort and Tyler Matakevich rotated in and out in place of injured Vince Williams.

While Fort scored the defensive touchdown, Bud Dupree almost scooped the ball up to score himself, but T.J. Watt is the man who forced the fumble. This game showed that a team effort enables all the units to really excel. At times, rushers disrupted Ryan’s rythym before a play could develop which helped the secondary. A couple times, including the strip sack, the secondary coverage gave the linemen time to close in on the quarterback.

Matt Thomas did get to play four snaps at the very end. Thomas made the final tackle that enabled Josh Dobbs to get his first snap of the season in the victory formation. Julio Jones and Calvin Ridley combined for 9 reception for 100 yards but no touchdowns. Kudos to Joe Haden who blanketed Jones for most of the game. His first catch did not come until the 4th quarter. Holding an offensive power to 17 points in today’s NFL is quite an achievement. A very solid performance that helped the Steelers to meet the standard on Sunday.

From the untrained eye of an average Steelers fan, the only major special teams’ miscue was the missed extra point. Boswell connected on the next five.

Prior to the game I predicted that the Steelers would win if Jordan Berry punted three times or less.

Berry was my special teams star of the game. His first punt was 51 yards and put the Falcons on their 21-yard line after Jordan Dangerfield’s tackle. His next was 55 yards that had Atlanta starting from their 11-yard line. His third punt was only 37 yards but was downed at the 2-yard line. Three plays later the defense scores to make the score 41-17.

In any case, the Steelers delivered a complete game. Offense, defense, and special teams performed like fans had been expecting all season with few hiccups. The last game that was so comfortable in a game that mattered was the 34-6 victory over the Houston Texans that the Steelers led from start to finish. The fans did boo the Steeler a few times, but mostly the Steelers gave the fans reason to cheer and they did. However, the referees did not.

Very loud sustained booing after the roughing the passer call on T.J. Watt and the unnecessary roughness call on Jon Bostic. These seemed inadvertent and in no way approach the level of the unnecessary roughness call on Foyesade Oluokun who lifted James Conner and forcibly shoved him into the ground. But, the 64,781 fans were into this game from start to finish. The Steelers offense scored on the opening kickoff. The defense scored the final points after a fine special team play. A complete game.

I’d like to give a special mention of Bill Knox. He is a college friend of mine and attended the game with me. His father passed away just a few weeks ago. Knoxie’s dad used to bring Bill to games at Pitt Stadium way back in the day to see Steelers games. Pittsburgh lost another fan, but Bill carries on the tradition.

The “best” of the 536 comments in the 1st Half thread came near the end of the half. Adam Zerner was confused and frustrated: “I can’t get over that INT. Throwing across the field, against his momentum, into the middle of the defense, defenders everywhere, target not even close to open, we’re up 13-10 in control of the game, with time for another shot and a FG at worst. Did he not see the defenders? Was he trying to throw it away?”  Steely McBeam was concerned about the defense, “Wish our defense played with the same intensity that Danny Smith chews gum.” But Jeremy has a hopeful message: “I found my Terrible Towel. Had been lost the first 4 games. this is a GREAT SIGN!”

676 comments in the 2nd Half Thread led by the Intense Camel with “Feels like the Falcons came disguised as the Steelers today lol .Also, Fort should be the starter the rest of the year.” 695hoops was still bothered by the end of the first half: “Wasted a pretty solid defensive half. Between this QB and this kicker. I don’t know who is doing more point shaving.” JSteeler appreciated Roosevelt Nix, “Nix Blocked punt. Turnover. Nix blocks the blocker. TD
Undrafted playing well. We need more guys like this. Hearts and Smarts!” ThePointe liked some of the offensive scheme, “Loving the bootlegs giving Ben just a few more seconds on the play.”

We did not meet the standard of 1000 comments in either half. You must have been too engrossed in the game to chat. However, the Pittsburgh Steelers did meet the standard by delivering a compete game and winning handily. Next week we will find out if the Steelers can repeat this performance in Cincinnati. The standard is the standard. Pittsburgh needs to stack another win up.

In the 2018 Memorial Day Weekend: Steelers Friday Night Five Questions, I committed to play songs that Steelers Depot respondents suggested might be the new Steelers anthem if Renegade by Styx was ever replaced. Here is entry 25 of 45 from Marcel Chris Chauvet & James: Iron Man by Black Sabbath.