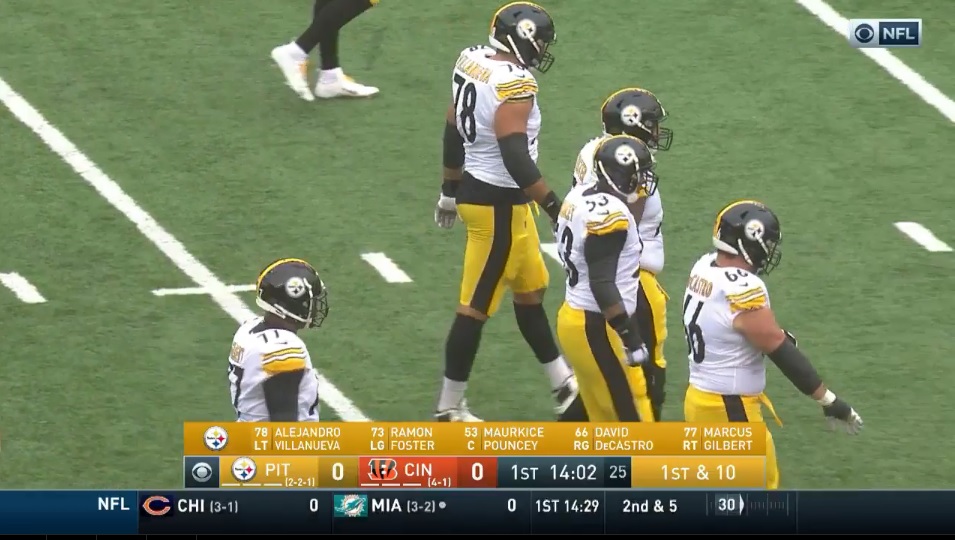 The Pittsburgh Steelers’ offense has finally found its groove the last two weeks. 34 points in a blowout win against the Atlanta Falcons. 28 yesterday against the Bengals, even if it was a game where not everything clicked. Largely, the offense is doing its job, just as we knew it needed to. That credit should go to different places. Ben Roethlisberger for making the throws when he has to, James Conner being the bellcow, Antonio Brown being the GOAT, and Vance McDonald running through defenders like the Kool Aid man does to walls.

But the unit that deserves most of the credit? More than what it’s getting? The offensive line, hands down.

Alejandro Villanueva. Ramon Foster. Maurkice Pouncey. David DeCastro. Marcus Gilbert. Take a bow, you five. I hope you don’t have to buy another steak dinner the rest of the season.

Ben Roethlisberger has been sacked once the last three weeks. One time – that’s it. And it’s not like he’s been able to sit on the run game. He’s thrown it 122 times over that span, the take down at the tail end of the Baltimore Ravens’ game when fans were already cycling through the exits serving as the lone exception.

Over that same span, he’s only been hit six times. Sunday against Cincinnati? Just once.

And these have been some talented defensive lines. Baltimore is total chaos and took Marcus Mariota down 11 times yesterday. That’s more than Roethlisberger (nine) has been sacked all season. The Falcons had plenty of talent up front, even without DT Grady Jarrett, and the Bengals don’t need much of an explanation. Stacked along that front with the willingness to dial up blitzes, like running Cover 0 with the game on the line (even though that one bite them in the end).

So pass protection has been fantastic. And the run game has come alive the last two weeks. Conner has comfortably averaged over five yards per carry the last two weeks and overall, when the Steelers get sniff the goal line, they’re converting. Even in games where the run game has looked bad on the box score, like against Tampa Bay, they’ve run it when they need to, closing that one out with a couple of strong runs from Conner.

They do all the little things right. Stunt pickup? It’s almost always pretty, among the best in the league, and defenders rarely waltz into the backfield. Penalties? A lot from this Steelers’ team overall but not many along the offensive line.

Drama? Yeah, none there. And when someone goes down, the next man is ready to step up. Whether that’s B.J. Finney, who feels like a 6th starter at this point, or Matt Feiler, who impressed OC Randy Fichtner so much he ordered a game ball for him.

Brown, Conner, Ben, JuJu, they’re all going to make the highlights. There’s no nice double-team block showing up on Sportscenter’s Top Ten. I’m guessing this offensive line realizes, accepts, and frankly, doesn’t care about it. That’s not what they signed up for.

But their performance, which right now, is functioning at an elite level, shouldn’t go unnoticed. Stelers’ Nation, go watch another football game during Pittsburgh’s upcoming bye week. Watch Russell Wilson run for his life behind an offensive line made up of scotch tape and mean words. Or the New York Giants struggle to do anything resembling offense unless Saquon Barkley goes all Tecmo Bowl Bo Jackson. Or the Chargers working on their 14th left guard. Take all that in and compare that to the awesome front five the Steelers have assembled.

Don’t take it for granted. It’s a special unit with a special coach. And they’re absolutely mowing down every unit they face.