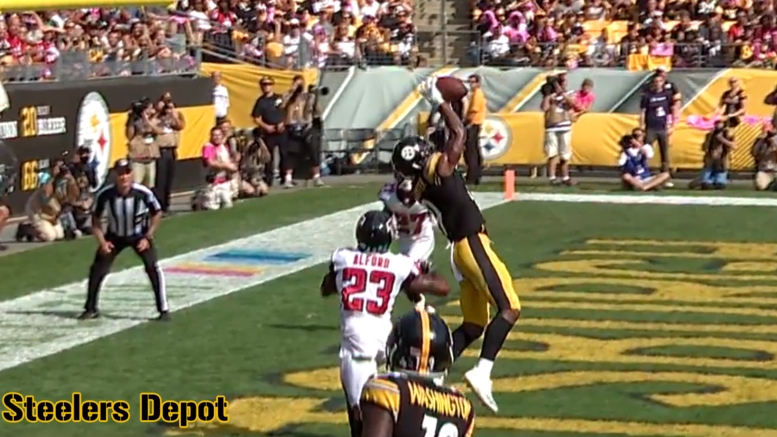 Pittsburgh Steelers wide receiver JuJu Smith-Schuster caught seven passes for 111 yards in the team’s final game before the bye week against the Cincinnati Bengals. Those seven receptions gave him 42 on the season, and 100 even for his career, which came in his 20th came played over the course of his first two seasons.

That made him the first Steelers player in history to reach the 100-catch mark in his first 20 games. The fastest player to reach 100 career receptions prior to Smith-Schuster was actually…running back Le’Veon Bell, who in his second season caught the 100th pass of his career in his 23rd game. Wide receiver Courtney Hawkins was the previous record-holder at 27. Antonio Brown was behind him at 28.

JuJu Smith-Schuster (@TeamJuJu) played in his 20th game yesterday and reached career catch No. 100 on his seventh grab, setting a #Steelers record for the fewest games to reach the 100-catch milestone:

Smith-Schuster also has 1478 receiving yards in his career, which is already the fifth-most in team history through a player’s first two seasons. Currently, Mike Wallace is the only player in team history to reach 2000 yards by the end of his second season, but the newcomer is well on pace to become the second.

Yet Wallace didn’t even have 1000 yards through his first 20 games played. He recorded 756 second his rookie season in 16 games, and added just 211 in the first four games of the 2010 season. He would finish that year with 1257 yards, giving him 2013 over his first two years combined.

Second on the all-time list is Louis Lipps, who finished his first two seasons in Pittsburgh with 1994 yards. After picking up 860 yards as a rookie in 14 games, he added another 474 in the first six games of the 1995 season, giving him 1334 yards in his first 20 games.

Then there was Santonio Holmes, who finished his first two years with 1766 receiving yards. He had 824 yards in 16 games as a rookie before adding 285 in the first four games of his second season to give him 1109 through 20 games.

Finally, there is Jimmy Orr and Buddy Dial. Smith-Schuster broke Orr’s receiving yardage record for a rookie. The latter finished his first two seasons, however, with 1514 yards, doing so in 24 total games. Dial had 1400 yards in 24 games.

Smith-Schuster is currently sitting on 1478 yards, as mentioned, which means it’s pretty likely that he will top Orr’s mark in his 21st game, this Sunday against the Cleveland Browns. For the moment, he is on pace to reach 1496 receiving yards this year.

Only four players—himself being the fourth—have recording 100 receptions in their first two seasons. Holmes had 101. Lipps had 104. Bell holds the franchise record at 128, and as you will have already figured out, Smith-Schuster is on pace to shatter that as well.

Oh, and his next touchdown will make him just the 11th player in franchise history with at least 10 through his first two seasons. Lipps is the huge outlier with 21, while Wallace, Dial, and Martavis Bryant had 16, 15, and 14, respectively. Smith-Schuster should hopefully reach at least 14, needing five more over the final 10 games.