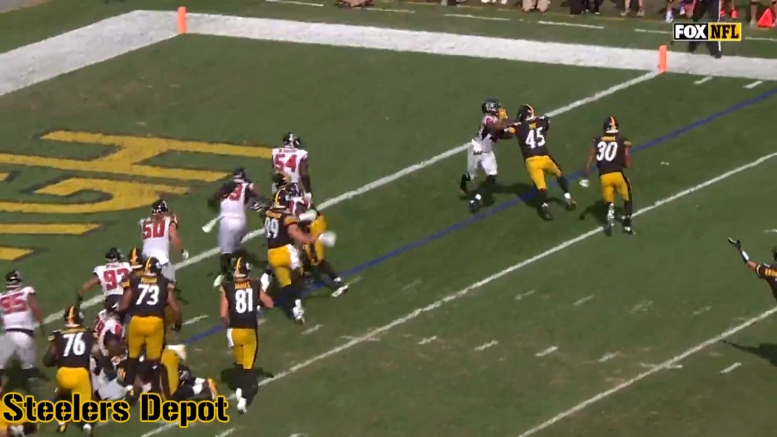 After coming out like a thunderclap in the season opener, the ground game went quiet over the course of the past three weeks with the exception of a couple of runs in the fourth quarter in the closing moments of a victory over the Tampa Bay Buccaneers.

That was not the case this afternoon for the Pittsburgh Steelers, who seemed to make an extra effort to get running back James Conner involved early. He actually accounted for a large chunk of his total yardage for the game on the team’s opening drive, on which he gained 72 of the 78 yards required to get into the end zone.

By the end of the day, he finished with a comfortable 21 carries, on which he produced 110 yards, his second 100-yard rushing game of the season, and for his career, including a long run of 30 yards. He also scored twice, giving him five rushing touchdowns on the season. Nobody had more than five entering today’s games, though three were at five. Two scored, and the third has yet to play.

That wasn’t all for the second-year back, however. He also added four receptions—on just four targets—for another 75 yards, giving him 185 yards from scrimmage on the day. That was not far from his career-high 192 yards that he set in the season opener.

It’s remarkable to consider how much of his production has come in two games, though. In the opener and today, he combined for 245 yards on the ground and 132 yards through the air for a total of 377 yards. In the other three games combined, he rushed for 97 yards and added 107 receiving yards for 204 total yards.

That’s far from chopped liver. In fact, it’s, as of right now, the most yards from scrimmage in the NFL. I’m not going to make this all about Le’Veon Bell, but the point is that Conner has shown, when he is at his best, this offense can do the same thing it has been doing for the past five years.

The only blemish on the day was a fumble that mercifully went out of bounds. But credit to his blockers, who did a much better job of giving him opportunities than they have for the past three weeks. Not that he didn’t make much of the yardage himself. He just wasn’t getting constantly hit in the backfield.