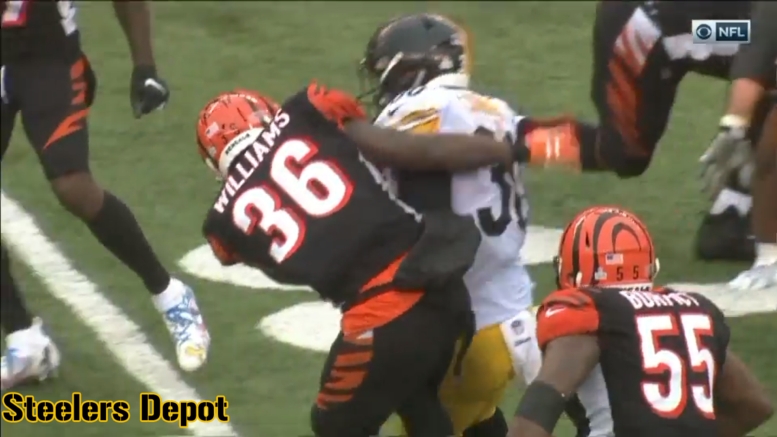 Pittsburgh Steelers running back James Conner went a bit quiet on the ground following a 135-yard, two-touchdown opening-day performance. Over the course of the three subsequent weeks, he rushed for just 97 yards on 32 carries, barely averaging three yards per, with one touchdown—though he also added 107 yards through the air on 13 receptions.

Fears of premature coronation seem to be slipping to the wayside now, however, after the second-year running back put forth his second strong effort in as many weeks, once again topping the 100-yard mark on the ground in an efficient manner. He picked up 111 rushing yards on 19 carries, a 5.8-yard average that is his highest of the year to date.

Over the past two weeks, he has 221 rushing yards on 40 carries, averaging better than 5.5 yards per attempt, and has scored on the ground four times in that span. While he did get stopped twice from the one-yard line on a drive in the second half, he has overall shown to be a reliable option at the goal line for the Steelers so far this season.

And unlike last week, he got off to a slow start. He opened the game with a carry for a one-yard loss. On the same drive, he was stuffed after a one-yard gain on second and three before adding another gain of one yard on first and 10, two incompletions and a punt following thereafter.

The Steelers went three and out on their next possession, which opened with a two-yard run by Conner, thereby tripling his total yardage for the day, but things got going after the Cincinnati Bengals got on the board, starting with a 26-yard rush up the right sideline to ignite the team’s first scoring drive of the game—one that he capped off himself on first and goal from the one.

He had two runs of double-digit yardage to open the second half for Pittsburgh, starting with an 11-yard gain. near the end of the drive, he ripped off a 26-yard run up the right sideline once again, very nearly scoring. I have no doubt that many of you will argue that he was in fact over the goal line, but it was ruled down on the field, and I’m not sure there was conclusive evidence to overturn the call.

Be that as it may, Conner quickly got the ball back after that, stopped for no gain from the one. After an incompletion on second down, he was stuffed in the backfield for a loss of two by Sam Hubbard and Vontaze Burfict.

While it was a disappointment to fail to capitalize on that goal-line opportunity, he continued to run hard, adding a 16-yarder in which he knocked Shawn Williams out of the game. He also got Burfict among the several tacklers he forced a missed tackle from on the evening.

There is a report that Le’Veon Bell intends to be with the team for their next game coming out of the bye week. It’s highly improbable, from my perspective, that he would start in a one-back set, however, in his first game back with the way Conner is playing.