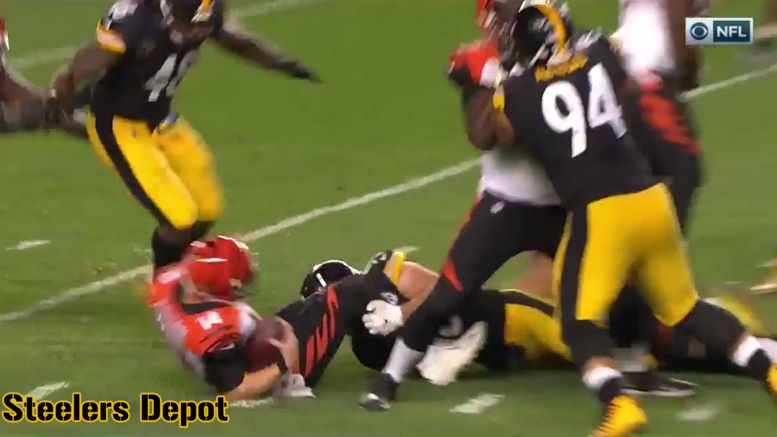 One of the knocks over the course of Andy Dalton’s career is that he has been a quarterback who struggles and breaks down when he is under pressure. The Cincinnati Bengals quarterback has always played well under a clean pocket, but has largely relied on stability in front of him on the offensive line to succeed.

It’s no coincidence that breakdowns in personnel along the line over the past two years have seen his performance, and the team’s overall record, his a career-low, but things are looking different this year. While he’s still gotten his interceptions up, his numbers when under pressure are improved as well, thanks in large part to a new offensive system and new quarterbacks coach.

According to Pro Football Focus, Dalton has faced pressure on 66 of his 202 dropbacks so far this season, which has resulted in nine sacks. But he has completed 26 of 54 pass attempts for 433 yards and five touchdowns, to three interceptions. His 83.3 quarterback rating is the seventh-best in the league, and he is the only AFC North quarterback in the top 15 in that category.

Which is why the Pittsburgh Steelers should be concerned. While they have been among the most successful teams in the league in generating pressure so far this season, they have also struggled to prevent quarterbacks from making plays while putting them under pressure.

Part of that has been a lack of discipline in the pass rush. Successfully bringing a quarterback to the ground most often depends on cohesion. You can get a clean run at him, but if he has someplace to run, he’s going to take it. If he has someone to throw to, he’s going to. The Steelers have chased a lot of quarterbacks around behind the line of scrimmage only to see them continue to make the play anyway.

This is exactly what Dalton has surprisingly been doing better so far this year, and may be the primary reason that they are off to a 4-1 start this year, looking down at everybody else in the AFC North. And exactly what the Steelers have to prevent from continuing today.

The good news is that they have also done a good job of bringing the quarterback down in general—a league-leading amount, in fact, and T.J. Watt leads the way with six sacks. Even Bud Dupree has three sacks on the season, and Jon Bostic has a couple as well.

It will be imperative for the coverage to hold up and prevent Dalton from having release valves when the pressure does arrive. That might mean Mike Hilton has a big role in slowing down Tyler Boyd, who has been crucial in the Bengals’ offense moving the chains on possession downs from the slot.